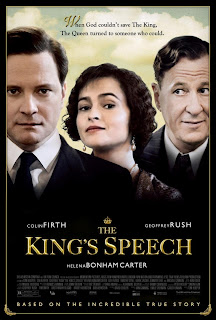 This movie surprised me -- it is much better than I expected.

Most historical films lack gripping drama and most personal dramas lack big context.  This movie has both in a winning combination.

The movie tells the true story of the man who became King George VI.  Afflicted with a stammer since childhood, Bertie struggles with an increasing demand for public-speaking arising from his regal position.  He becomes King when his elder-brother abdicates the throne (to marry an American divorcee) and must make important war-time speeches to calm and rally his country.  In his struggle, Bertie gets the assistance of an uncredentialed Australian whose results in helping people overcome speech-defects result from both technical aid and real friendship.

Colin Firth is a terrific actor who deserved the Oscar nomination he received last year for the largely-unseen film, "A Single Man."  You may remember him as Bridget Jones's boyfriend, Mark Darcy, in the two Bridget Jones movies.  Here, Firth is exceptional in portraying a determined, yet frustrated man who has to reach further than he's capable of, with the fate of a country resting on the outcome.

Firth is certain to get another Oscar-nomination and I wouldn't be at all surprised to see him win Best Actor.  Geoffrey Rush is equally good as the Aussie speech-therapist.  Helena Bonham Carter plays Bertie's wife with warmth.

Bertie's daughter, Elizabeth, grew up to become the current Queen of England.  She and her sister Margaret are shown as children.

This is an engaging human-drama about big world events, with interesting and accurate history.  The writing, performances and direction are superb and worth watching.
Posted by Shybiker at 6:58 PM