When I shop for gifts for others, I always end up seeing something I want. And I just did. This year, I'm gonna get it for myself if nobody else does.

It's a backpack. I have two backpacks, one for everyday use and another for hiking. My daily pack, which I wear for just roaming around, is old and cheap. It could stand being replaced by something new and nice. I looked and looked and finally found a perfect one at Tumi (a store that makes excellent luggage). It's small but well-designed and looks good. The picture below doesn't really do it justice. In person, it exudes quality and sophistication. Like me!

What do you want for Christmas? 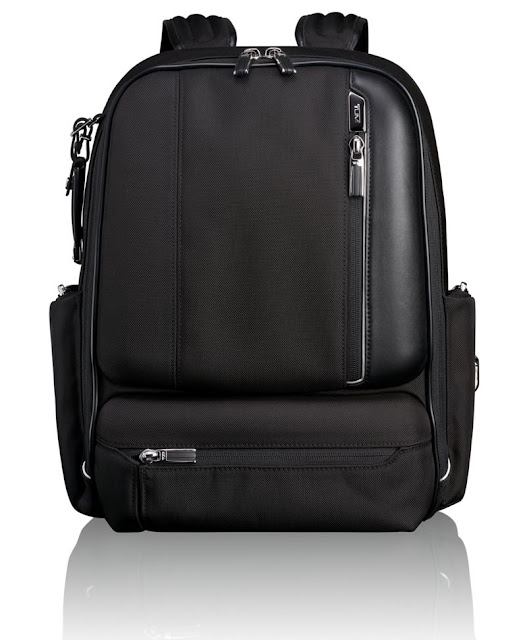 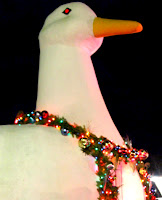 After the sun disappeared today, I went on a 100-mile motorcycle ride to see the annual holiday lighting of our legendary Big Duck. The event was festive and crowded.

On the way there, I stopped for dinner at my parents' favorite restaurant, Cliff's Elbow Room, and had its famous marinated steak. Fifty years ago, my parents took me there and those memories are poignant.

Special thanks to the heated seat on my K1600GTL. It feels like sitting on a radiator -- which is valuable when you're sailing through cold air at 80 mph. 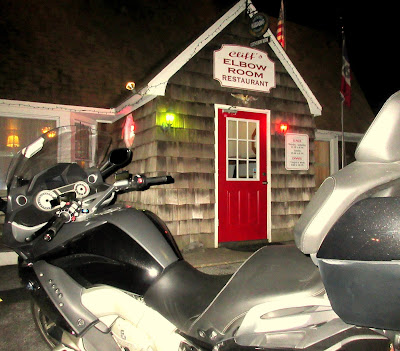 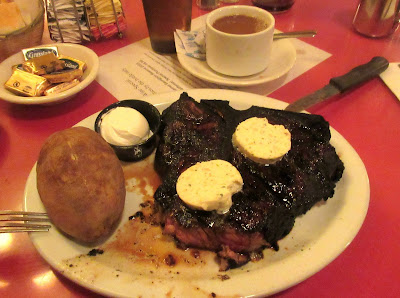 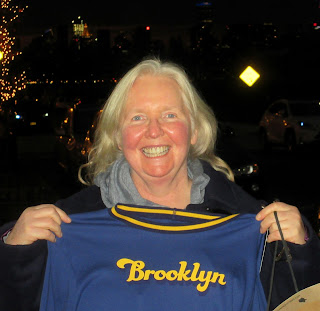 Today was a beautiful day in New York. Sunny and surprisingly warm. It would have been a shame not to go outdoors and enjoy the nice weather.

I went into Brooklyn. My friend Maura, who used to live in New York and moved to Wales, came back to visit for the holidays. I decided to show her how much Brooklyn has changed over the past 25 years. She didn't recognize the place. We spent the day in Williamsburg which is one of the hippest, fun neighborhoods.

I had a gift-card to Rough Trade, a store with the coolest name. They sell vinyl records and obscure books about music. A famous punk-rocker (Richard Hell) was sitting at a table giving autographs to a long line of fans. I picked up an album by St. Vincent (have you heard of her?) and a book by James Baldwin, an amazing author who wrote about racism half a century ago. His words still have relevance and deep insight.

We went to Artists and Fleas, a pleasant collection of booths for independent artists and crafts-people who sell high-quality, hand-made goods. I picked up some fun holiday gifts and a bar of artisanal soap. You can never be too clean.  :-)

I found a bottle of scrumptious hot sauce at Heatonist, a store with a dozen hot sauces that were unknown to me because they're made by small companies. The flavor of the one I selected is rich and savory.

Bedford Avenue, Williamsburg's main street, was hoppin.' Throngs of young people were out enjoying the warm sunshine. There are numerous restaurants, stores, cafes and nightclubs. We ate delicious perogies at the best Polish restaurant in New York.

Some pics are below.  What did you do today? 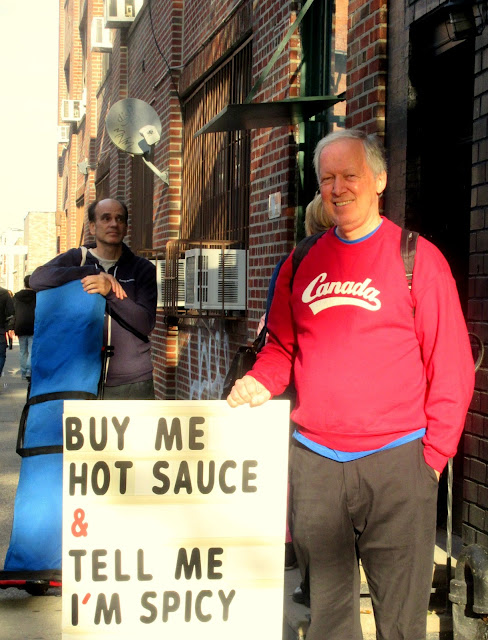 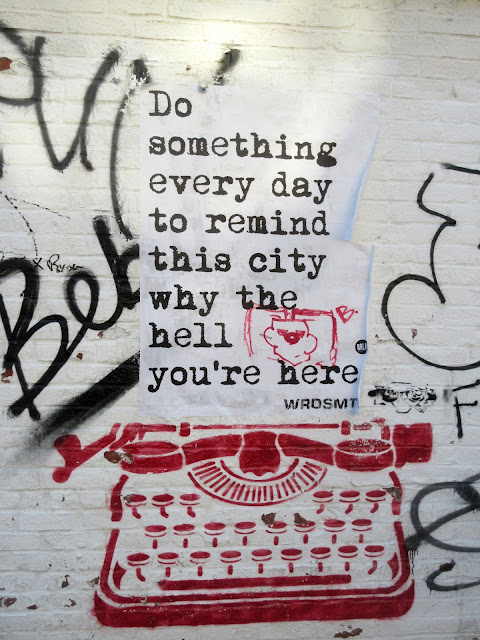 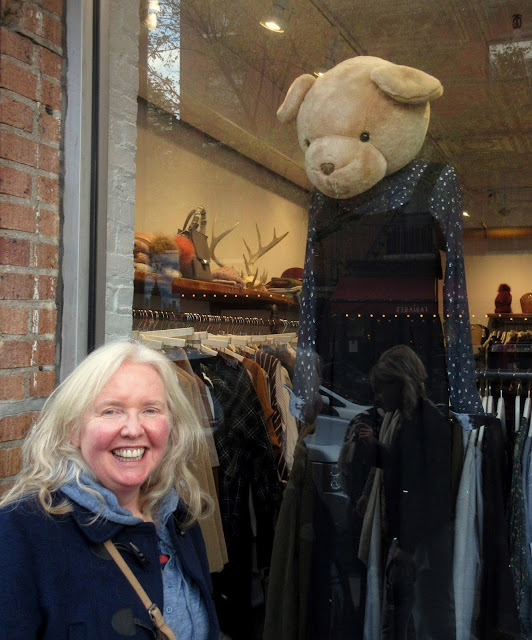 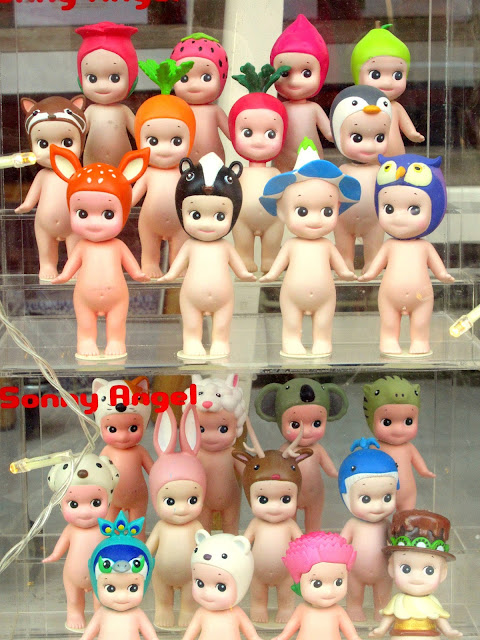 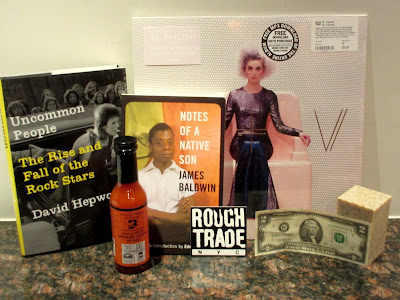 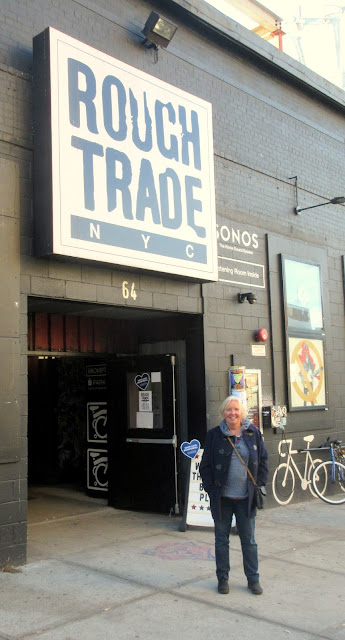 The Joy of Friendship 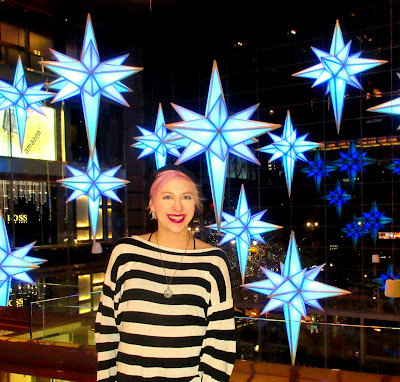 I had the most wonderful time this weekend! My friend Emma is visiting from Ohio and we had a blast together.

I've known Emma for almost a decade. She had a fashion blog and we followed each other. When she stopped blogging, I stayed in touch with her on Facebook. This Summer I traveled to her hometown of Columbus, OH and she decided to reciprocate with a solo trip to New York.

Emma has everything you want in a friend. She's smart, interesting and supportive. More than most people, Emma pays close attention. She's listened carefully to me and understands me unusually well. Plus Emma is a delight to hang out with; her charm is abundant. And, on top of all that, Emma has terrific talent at applying makeup; I hope she'll teach me some of her tricks. 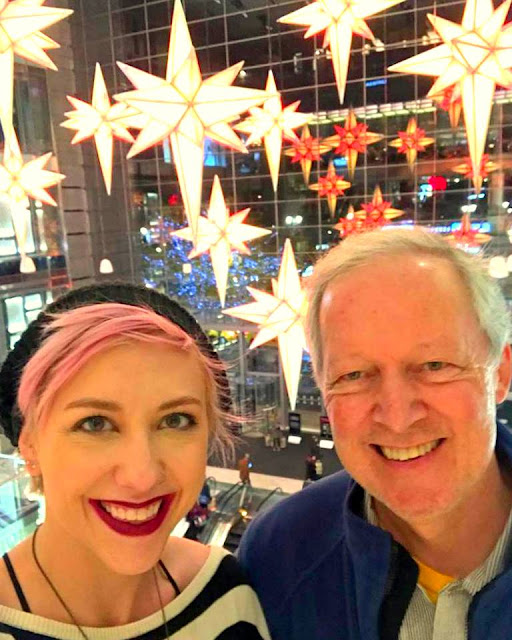 Emma arrived on Saturday and we spent the weekend exploring fun offerings in my hometown. Saturday night we saw an entertaining magic show by a female magician whose big hair was an illusion in itself. Sunday we shopped at my favorite stores where Emma found a cute ring and edgy black booties. Today I brought her into Manhattan where we saw a fashion exhibition at MOMA and ate a delicious meal at Sarabeth's on the southern tip of Central Park.

Emma plans to spend the rest of the week exploring New York City in furtherance of a novel she's researching.

I've lived a long time so believe me when I say that friendship is the healthiest -- and most fun -- activity we can pursue. You get amply rewarded for effort in that direction so go out and  play with your friends!
Posted by Shybiker at 12:20 AM 24 comments: 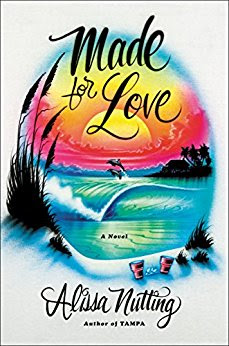 Most of us know instantly whether an author's work resonates in us. Their voice connects to our experience of the world. I just discovered a new author whose work I enjoy. Her writing is witty and immensely entertaining. Even better, she tackles weighty subjects of great modern importance.

Alissa Nutting is a college professor who teaches creative writing in the Midwest. She's originally from Florida; that background makes an appearance in her work. Nutting is married to another talented novelist.

I first learned of Nutting through a rave review of her recently-published second novel, Made For Love. I'm currently catching up and reading her first novel, Tampa.

The review intrigued me -- “ 'Made for Love' crackles and satisfies by all its own weird rules, subversively inventing delight where none should exist. How can a book be so bright, and so dark?"

The topics wrestled with in Made For Love are of-the-moment contemporary, exploring the environment that technology has created for us. Human relationships, including with our spouses and family, are affected by modern technology in significant ways. I myself have been pondering these very subjects lately as I sense major changes from earlier decades I lived through.

Nutting's talents are many. First, her imagination transports us to places we recognize even though they are extensions of the present. The details of those places are wholly convincing. I wouldn't call her work science fiction because it feels so authentic; instead, it's imagination exercised with a purpose. Seeds of this future already exist; Nutting's fictional world is merely their germination.

The novel starts two years in the future and then jumps around in time. It opens with a woman, Hazel, confronting the fact that her elderly father has a love/sex robot. This is not so crazy as it sounds: technology has reached the point of creating robots capable of human companionship and, yes, even sexual relations. How we feel about a loved one interacting with, even loving an inanimate robot is something we'll all face -- and sooner than you imagine. Just Google the subject and you'll see early prototypes of these objects. A huge market for robotic companions exists among the lonely elderly and others starved of basic human emotion. Widespread use of such robots will create serious concern, debate and, likely, ultimate acceptance.

Another way the main character relates to the subject of technology is through her failed marriage to Byron, an "eccentric tech multimillionaire." His company (named with a wink, Gogol Industries) strives to integrate technological inventions into daily life. Byron, as rapacious in his marriage as he is in business, tries to control Hazel. Her struggle to escape his silicon cage is one most of us can relate to.

Magnifying the pleasure of reading smart exploration of these subjects are Nutting's writing skills. Her style is lucid and witty. She deploys amusing metaphors and language (including my favorite word, penultimate). Candidly, I read much of the book stimulated with a buzz similar to that which comes from a second glass of wine. I laughed out loud at the comic ingenuity of naming a character Fiffany.

The novel is deeply humorous. Its sense of humor has dimension and scope. The book made me realize how satire can weaponize intelligence to explode hardened social realities.

Finally, let me quote a passage from the book which displays the foregoing gifts. Once you read this, you should be only minutes away from clicking on links to buy the book at Amazon:

Hazel thought for a moment. "But I wouldn't have to pretend it was great, right?" Prior to Liver, she'd pretended to be in love with everyone she slept with, at least initially, although that never turned out well. Especially not with Byron. When had she so internalized the feeling that if something wasn't great she needed to bridge the gap between reality and idealism with her own manufactured enthusiasm? Her enthusiasm was like one of those faux snow machines at a ski resort. For most of her life it had been churning out synthetic delight. It had basically forgotten the original recipe.

This journey back in time is prologue for my newest outfit. I found a retro-styled piece in one of my favorite stores. The style and print are pure Eighties. Even though leopard-print has survived the decade, this particular type of it mirrors what was used back then. I should know: I was in my twenties then.

Do you ever get nostalgic for the past?

Perhaps the reason my mind is travelling back in time is because today is my birthday. My *60th* birthday. Ouch!

Do I look 60 years old? Please don't answer that if you're gonna say yes! 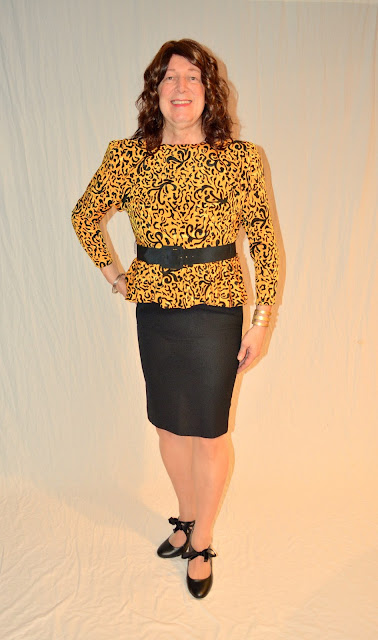 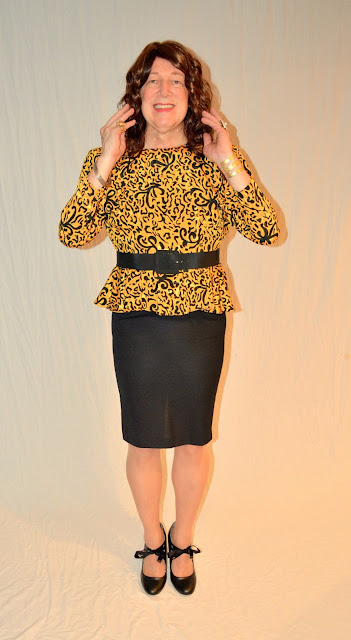 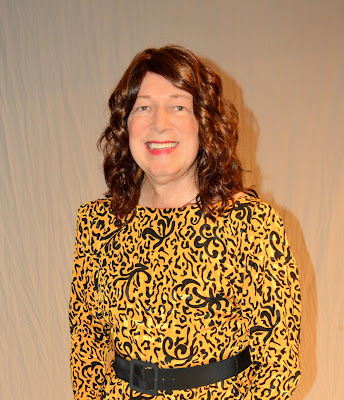 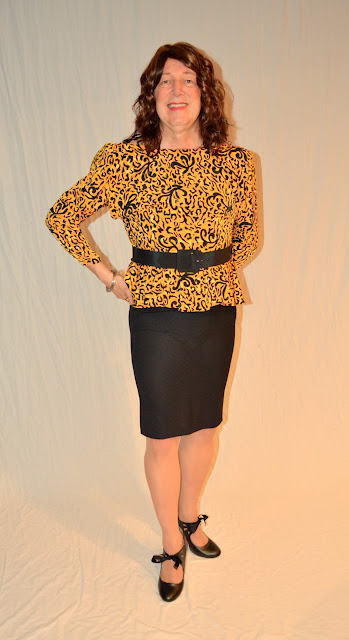 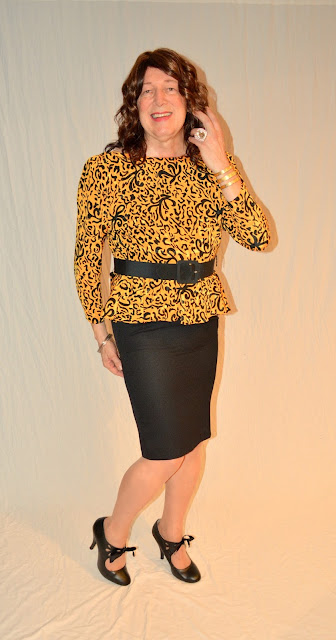 The End Of My Youth

Today is the last day of my fifties -- and, indisputably, my youth. Which doesn't mean I'm going to start acting old. As I explained before, I plan to hang onto my energetic attitude for as long as it lasts.

I pondered what to do today. I could go into the office and get aggravated. Or I could stay home, collapse on the couch and bemoan my loss. Or -- and this is where I'm leaning -- I can jump on my BMW S1000R rocket-ship, twist the throttle and blast off into space.

I think that's the right choice for me. Enjoy your day! 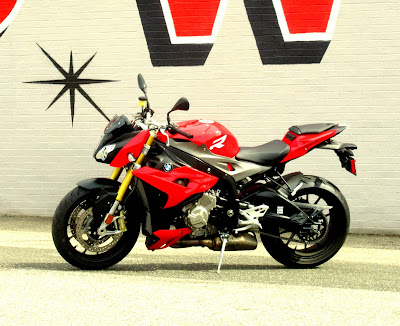 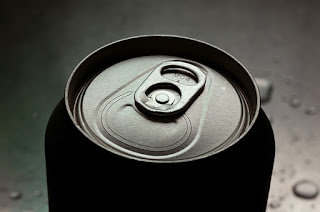 Over the past century, cans have been popular containers for food and beverages. And there have been several experiments on ways to open them.

Currently, almost all soda cans use the same type of opener, one that has a separate piece of metal attached to the can at a single spot which can rotate 360-degrees around. The metal-piece is used to depress the wide-mouth top into the can. But is that all? Can the metal-piece do something else?

Yes! It's designed to assist you in another way, but sadly few realize this.

The little hole in the metal-piece is intended to make it easy for you to use a straw. You swing the piece around so it's over the wide-mouth and then stick your straw through it. It will hold the straw in place. Otherwise, if you just put the straw into the wide-mouth opening, it will bounce around and not stay put.