What do you do in the doldrums of Winter? You gear up! The best way to generate enthusiasm for Spring is to prepare for adventure. The process lifts your spirits. You imagine having fun outdoors and preparation makes those excursions easier.

I'm a biker/hiker. I use two types of outdoor gear -- motorcycle stuff and hiking stuff. This Winter I surveyed my closets, identified what's missing and filled gaps. I just added two pieces which make me smile -- a handsome hiking hat and a black leather motorcycle vest. Both are attractive and useful. 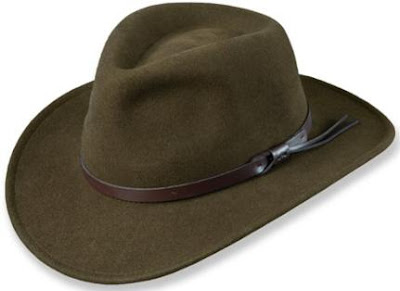 First, the hat. I've never been a hat-person because hats require panache I lack. But I also never shirk from protecting myself.

Hiking in the sun, I wondered afterward why the top of my head hurt. Sunburn! In a spot where my hair is getting sparse. I never expected that and never thought to put sunscreen on the top of my head. I assumed (incorrectly) that my scalp was protected by a robust head of hair. Ahh... age. Our minds think our bodies haven't changed but look in the mirror, buddy. It's happenin'.

So a hat is necessary. To keep my head from getting sunburned. By the way, anyone who uses the phrase "bald patch" is dead to me, so be careful with your comments.  :-)

This Dorfman Pacific hiking hat is so stylish it's hard to believe it's intended for hiking. No reason you can't look good while conquering the outdoors!

My new "Street & Steel" motorcycle vest is also fun. It conveys the right kind of style that helps one fit in with a crowd of bikers, which is where I find myself. When in Rome... 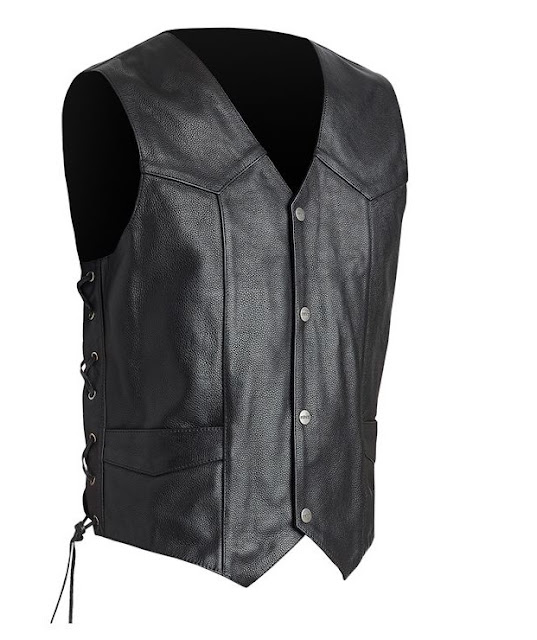 What are you doing to prepare for Spring?
Posted by Shybiker at 11:22 AM 4 comments: 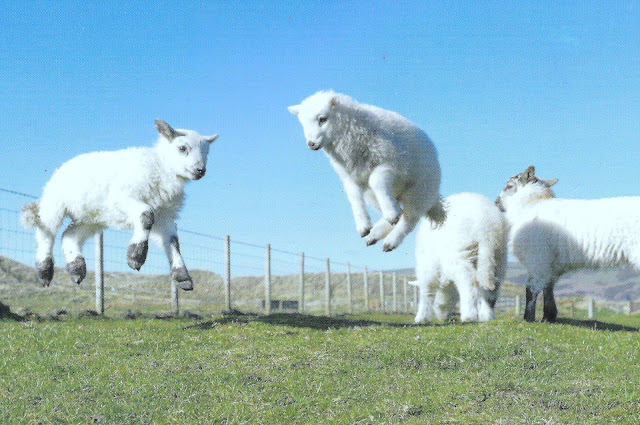 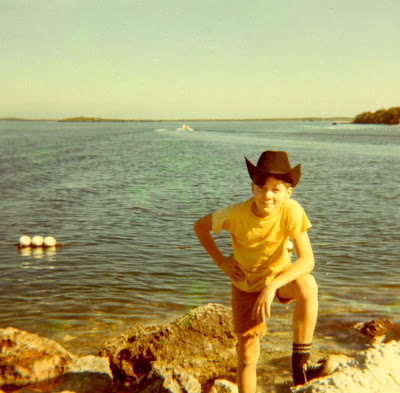 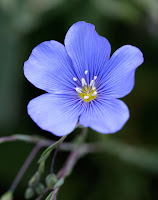 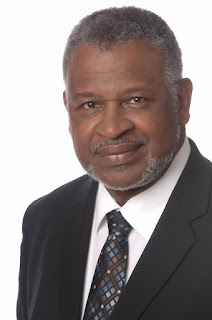 I have two things planned. The first is visiting a friend who used to be my secretary 20 years ago (Nancy). Sadly, even though Nancy is only in her forties, she contracted Lyme disease which disables her. She has to use a walker and the illness severely limits her life. My sorrow about her bad luck encourages me to see her often. Plus, she's a wonderful friend.

The other thing I'm doing is fun. An opera singer who's performed around the world grew up near me before embarking on his international career. Now living in Germany, he's returning home to give a concert of African-American spirituals. Songs like, "Swing low sweet Chariot" and "Sometimes I feel like a motherless chile’." Sung with talent, these soulful songs should be moving to hear. Also it's nice to attend a live event close to home.

The singer's name is Zelotes Edmund Toliver. Isn't that a cool name?

How 'bout you? What are your weekend plans?
Posted by Shybiker at 10:17 AM 18 comments:

Chillin' In The Past 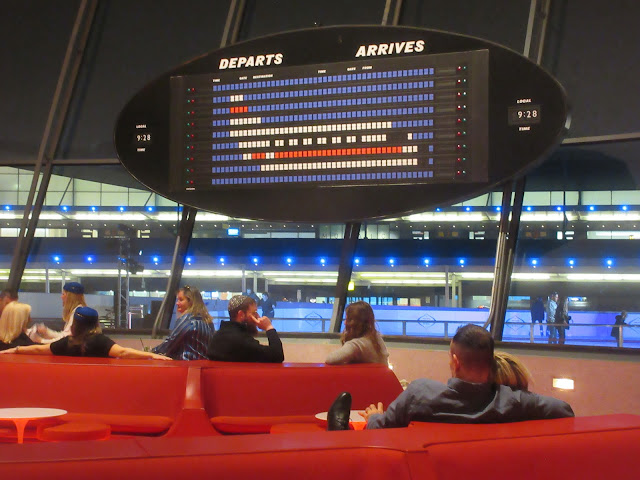 My favorite place to hang out with friends right now is the cocktail lounge at TWA Hotel. The place has early-1960's decor, cool music, delicious drinks, tasty appetizers and a fun retro- vibe. Since discovering it on my birthday last November I've been back several times, including last week. The hotel is convenient to get to, especially for anyone flying into New York.

The place's coolness was just officially confirmed -- it's the site of a fancy fashion-shoot in Vogue (March, pp. 326-7). The lounge's bright red, mid-century modern style is perfect setting for hip events.

Come meet me there for a drink! 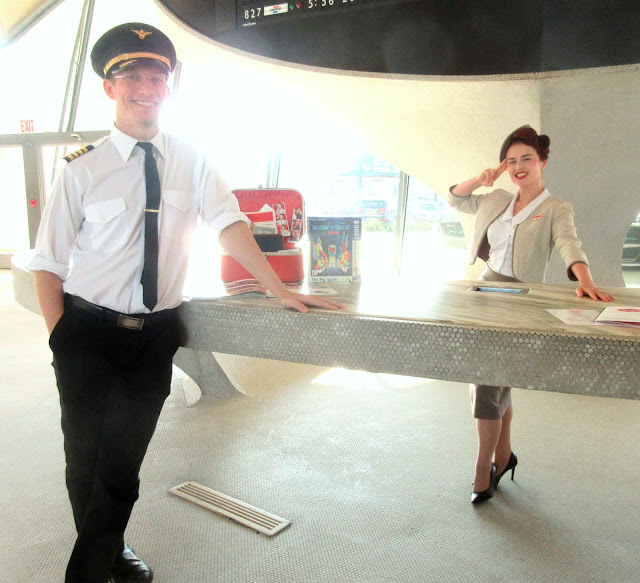 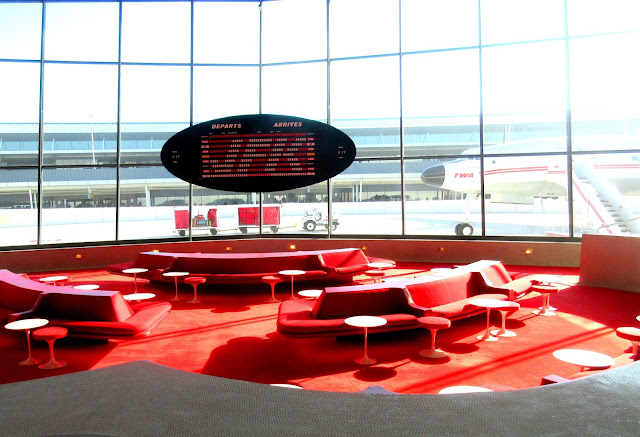 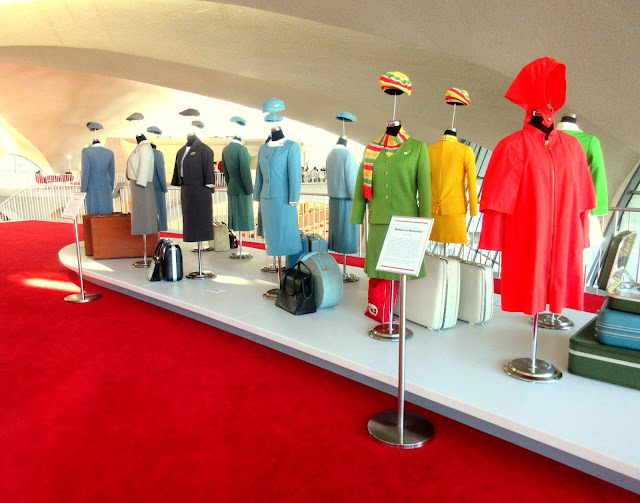 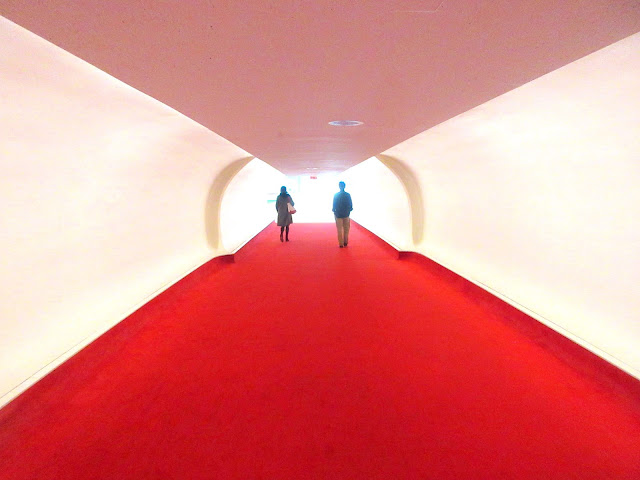 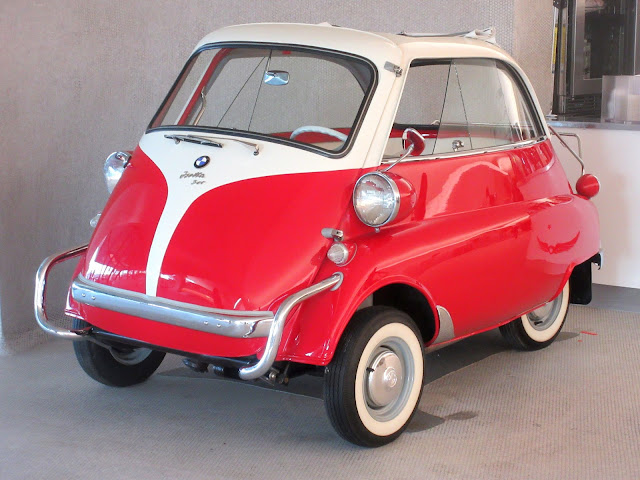 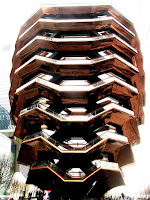 I balance bad things in my life with good. Today I had to see my surgeon in NYC so I used the opportunity to experience something fun in the city. I went to the new Hudson Yards. Opened last year, Hudson Yards (HY) is a mammoth shopping, dining and entertainment area on the west side of Midtown. It's a short walk from Penn Station.

I expected to hate HY because it's intended for rich people but, damn. Damn. That would be like hating New York itself. You can't hate something which is full of fun stuff. If you choose wisely, you can enjoy HY on your own terms, with or without money.

The biggest attraction is the "Vessel," a huge structure designed for walking and photography (my favorite activities). There are pics below. Entry into the structure is free.

Dining options are good and wide. I ate a delicious lunch at one of a dozen restaurants. There are a half-dozen nice coffee-shops. There's a chic bar in Neimann Marcus I'm keen to try.

Have you been to Hudson Yards? What was your experience? 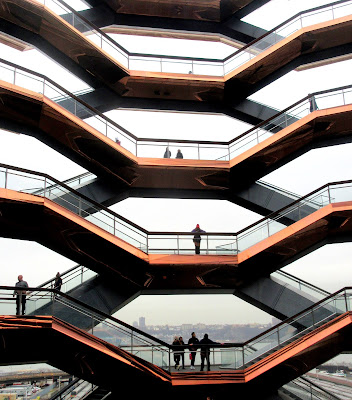 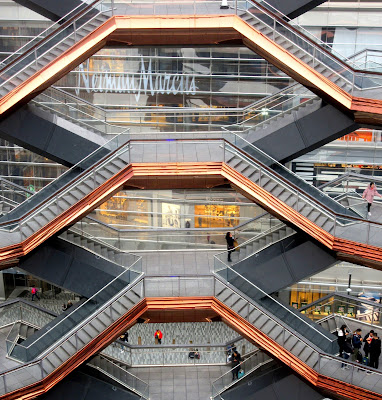 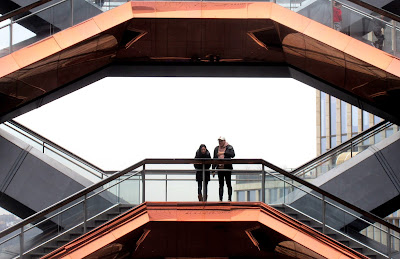 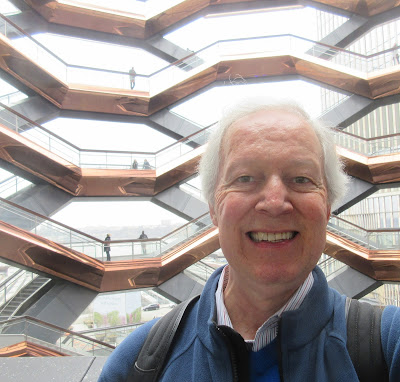 You Don't Have To Give Up

I saw a funny -- but sad -- bumper-sticker on a Honda SUV this morning: 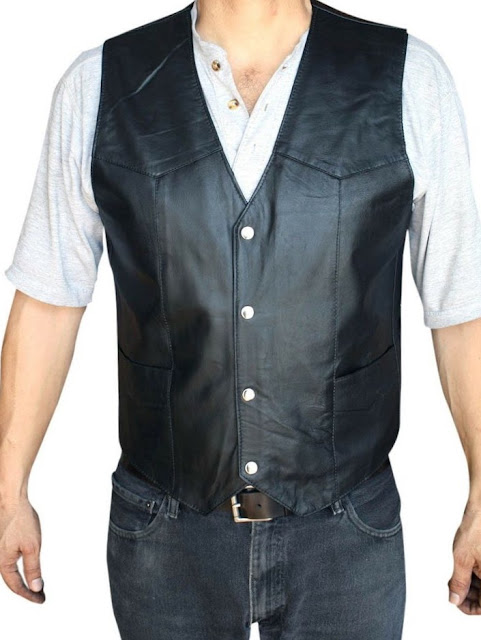 My last outfit-post explored "normal" clothes. It was fun.

We now return to our regularly-scheduled programming -- my natural style which is fierce, flashy and fabulous. It's who I am deep inside.

The catalyst for the outfit below was discovering a real 1960's dress in my friend's vintage store yesterday. The dress is authentic and has the age-holes and tears to prove it. Certainly the style reflects the wild fashion existing back then -- and I should know, I was there!

What do you think? Have you ever worn Sixties' style? 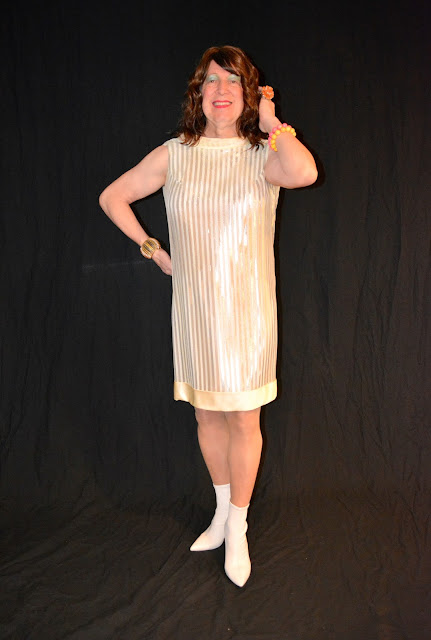 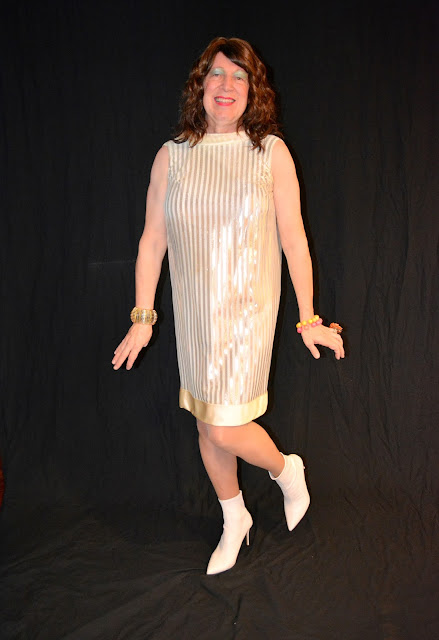 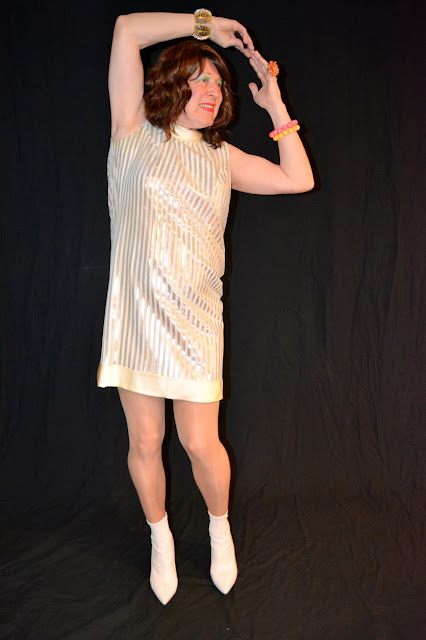 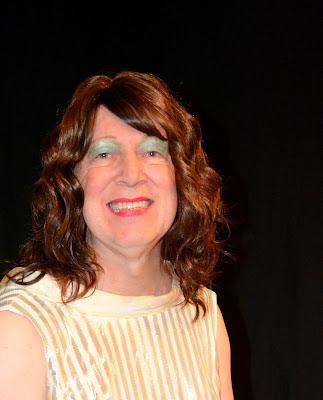 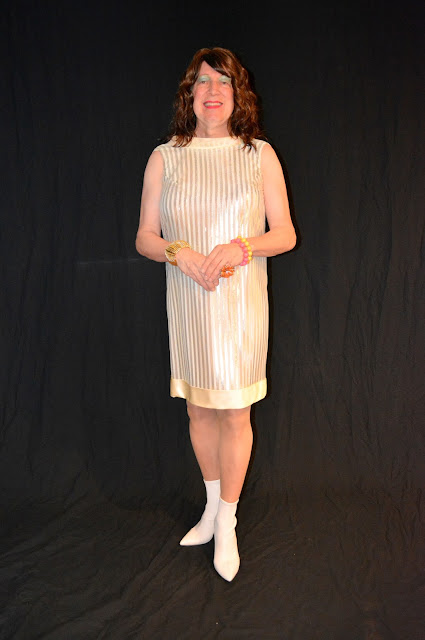