One of my parents' friends, Eleanor, died this year. Eleanor's daughter is sorting through her things and found some old photographs of my father. They show him right after he came to this country and before he got married (1952). Here's my favorite one.

I guess this explains my interest in cars. It's genetic. 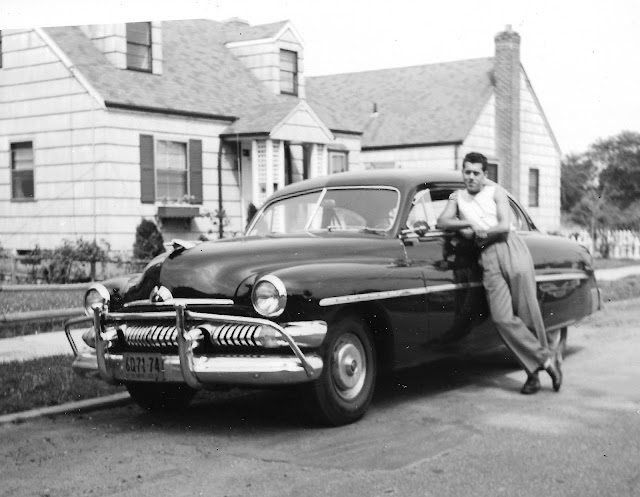 When you can't sleep, you can always take a picture. 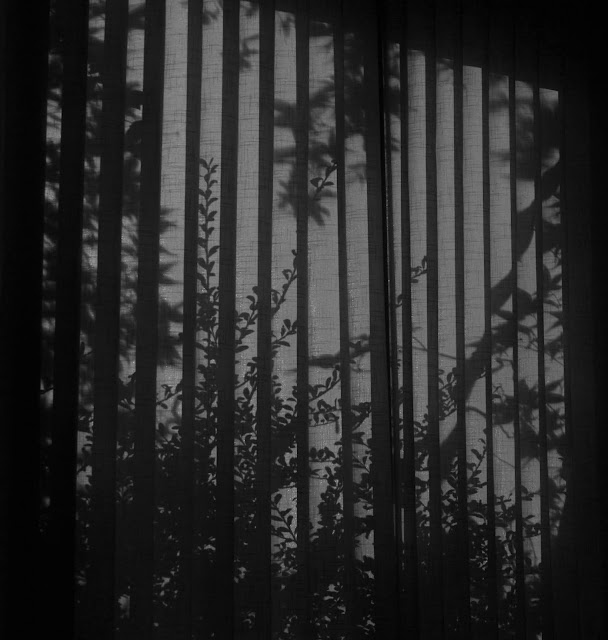 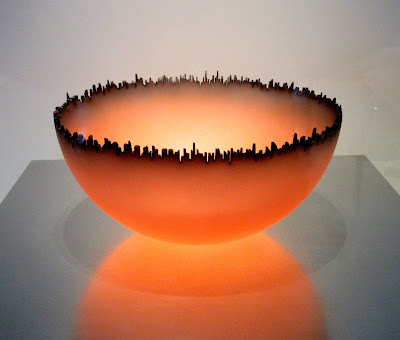 I've always wanted to collect art and finally started the process.
As much as I know about art itself, there's plenty more to learn on the collecting process. Buying museum-level pieces of fine art involves figuring out where to go to buy the work (e.g., art gallery, auction house, art fair), what's reasonable to pay, how to transport expensive pieces, whether you need specific insurance, and ways to display art with sufficient protection against drunk guests who might stumble into it. Fortunately I like to learn! 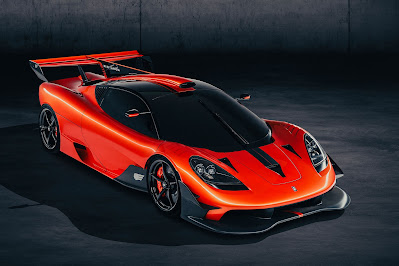 The best way to met your needs is to pick the right tool for the job. That principle applies to vehicular transportation.

Through trial-and-error I discovered that different motorcycles and cars serve different purposes. Trying to use them outside those purposes -- like bringing a station wagon to the racetrack -- is a mistake.

If your budget allows, you should get separate vehicles for different needs. I've learned I need two motorcycles: not ten, not one, but two. A sport-bike for riding fast with excellent handling and a touring bike to travel far in comfort. I wouldn't want to take the sport-bike on an uncomfortable long trip nor would it be fun to lean the heavy touring bike far over on a race-track.

I ride my bikes; they weren't bought for display so all my needs are met by these two. Unlike some motorcyclists, I don't need to collect a half dozen bikes simply to show them off.

I'm figuring out what my needs are for car transportation and that education is continuing. I need a "daily driver" (something reliable and modestly fun). The Fiat Abarth used to fulfill that role but it's starting to have mechanical problems; it doesn't give me the confidence I want not to break down on a trip far from home. So I picked up the new Mazda Miata and find it's PERFECT for this purpose. Not expensive but lots of fun; not fancy but garners compliments; and has great handling (due to low weight) despite an engine that's not powerful.

Like with motorcycles, I need two cars: one for daily driving and another, crappy one for nasty weather and bad neighborhoods. I won't take the Miata out in snow and am keeping the Fiat around for ugly Winter driving.

Unlike with motorcycles, I have a desire to add a third car. It isn't a necessity but will improve my emotional health. In the near future when I figure out what my final finances are (after selling investments), I'll get a "super-car" or "hyper-car." If you don't know what these terms mean, suffice it to say they translate to "SERIOUS MONEY."

The goal of this last vehicle is not whether it drives well in snow or has a trunk big enough for groceries; the question is: does the car raise my spirits? Will it make me happy as a reward for a lifetime of grueling work? In truth, that's a need, too, and someday I hope to satisfy it. 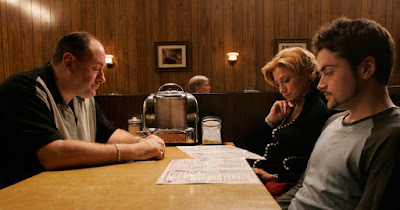 Over the past few weeks I re-watched the entire "The Sopranos" series from beginning to end, all six seasons. Last night was its conclusion.
The way the show ended is famous for how viewers reacted. Do you have a theory on what it meant? What happened? Why the show's creator (David Chase) chose that?

Contemplating an anniversary gift for Robin I wanted something special -- an object that's not only stylish but also serves as a metaphor. I found one that does such double duty.

I bought her an antique radio from the 1940s. It works perfectly and even has Bluetooth added so she can listen to digital music in her phone/computer. The radio was restored by a terrific radio technician who sells dozens of cool vintage radios. His company website is Retro Radio Farm. Check it out.

The metaphor of the gift is that just because something is old doesn't mean it doesn't work. The radio, like our relationship, endures after decades and decades. 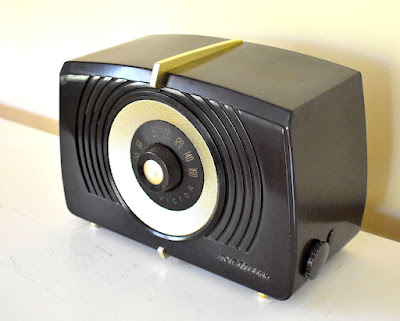 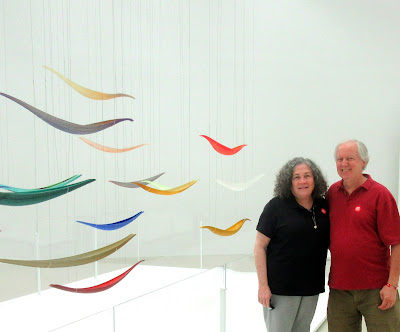 To celebrate our 20th wedding anniversary, I took Robin to the Finger Lakes this weekend. We visited its chief attraction (Corning Museum of Glass) and nicest town (Skaneateles).
The photo above is at the Museum. The floating pieces are made of glass. This institution is one of the best museums I've ever visited; I've gone there twice now and will return again.
A waiter surprised us with a free dessert. Robin started eating it before realizing she wanted a picture which explains the smudge.  :-) 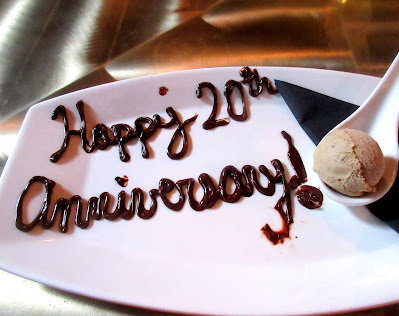 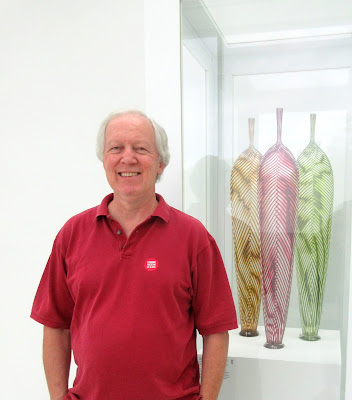 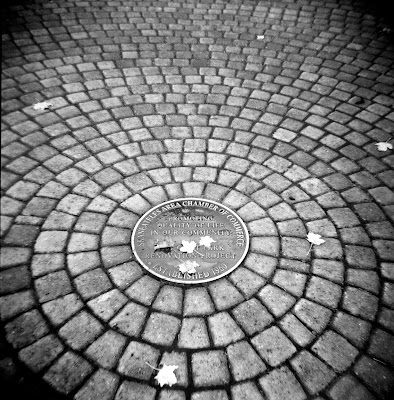 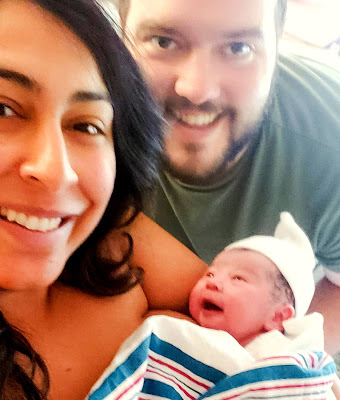 A birth just occurred in my family. Honestly, I didn't expect it to affect me as intensely as it's doing. Not because of the baby herself (all babies are wonderful) but because what her birth represents in my family's history.

My brother's son Johnathan and his wife Jessica just had baby Ella, the first of a new generation. Ella carries our family's name forward to a level beyond my adult nephew and nieces. I wasn't sure what my relation to the child is called so I had to look it up: she's my "grand-niece" or "great-niece," depending on the term you prefer.

When I was growing up, there were four of us: my mother, my father, my brother Richard and myself. My parents had harsh childhoods during rough times (e.g., World War II). They were immigrants struggling to make viable lives in a new country -- which explains how feverishly they clung to the idea of family. Lacking other support, they tried and succeeded at creating their own family. My mother, especially.

My mother, Barbara Jo, was a serious woman. She ruled our family with an iron fist. Grown men quivered at her approach. You learned quickly that, despite her size (under 5-ft tall), Barbara Jo always got what she wanted. As they say in Star Trek, resistance was futile. She grabbed your ankle with bulldog grip and wouldn't let go until you surrendered. We always did.

What made my mother's control palatable was its motivation -- love. You instinctively knew she was devoting her life and all her effort toward building and maintaining a family. A real one with strong bonds. A family that didn't exist before her.

I was the first born. I was taught the importance of my life -- I represented my family to the outside world. Our success, not merely mine, was reflected in every accomplishment I achieved. Scholastic scores, athletic victories, they were all lauded by my parents as evidence of the family's strength. I was considered more than an individual, I was held up as the chief team-player on whom huge hope and expectation was laid. That was drilled into me daily. I didn't have a choice so objecting to it was pointless.

My brother Richard was only one year younger which made our family unit very compact. The four of us did everything together, from eating dinner every day to camping on cheap vacations. "The boys" were treated the same even though Richard's experience of life differed dramatically from mine.

Richard was troubled in several ways. When he didn't measure up to my parents' expectations, they came down hard on him. Which caused a deep rift between them and him. I tried to support Richard and advised him repeatedly not to compare himself to me or replicate my successes; I urged him to forge his own path in other directions. He had trouble doing that; he kept banging against the same wall. Eventually Richard's misbehavior got worse, out of frustration at his lack of achievement and my parents' unrelenting pressure. Ironically, Richard ended up imitating my parents in striking ways while I quietly detached myself from their influence.

Richard had three small children, the oldest of whom, Johnathan, was three when Richard died. Those children grew up not knowing or remembering their father.

My mother died in 1990 at the young age of 54 (breast cancer). Richard died in 1991 at the tender age of 33 (heart defect). My father is still alive, at age 91, but in declining mental ability. He's comfortable but in some ways already gone.

I'm jubilant at the birth of a new generation for my family. But... it comes with a sense of loss. For the loved ones no longer here, for the life now gone. For my connections to family who exist only in my memory. 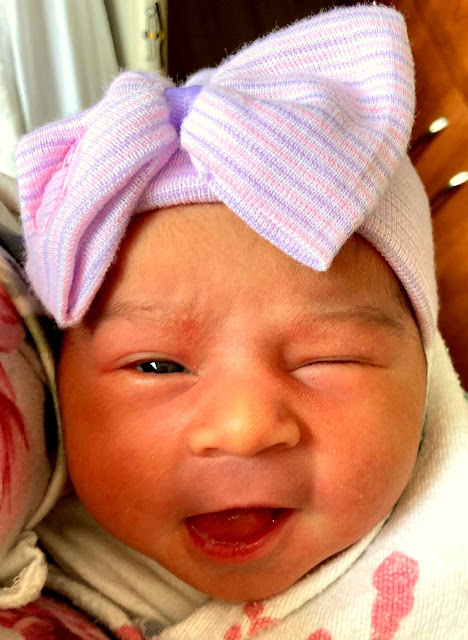 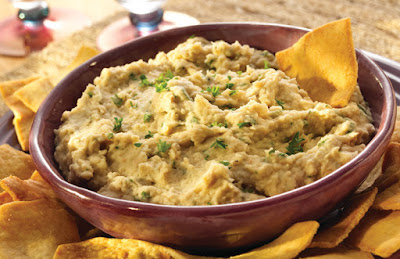 I love garlic so when I see "garlic dip" in Greek restaurants I always try it. It's called Skordalia and served with pita bread.

I never knew what else is in the dish so I looked it up. And made some today. Delicious!

In addition to garlic, Skordalia has potatoes (lots of 'em, boiled and mashed), lemon juice and olive oil. For spice, I add small chunks of fresh jalapenos which are optional, of course.

Skordalia is a simple dish easy to make and perfect for Summer meals. Try it!

The Adirondack High Peaks are 46 mountains spread over 5,000 square miles. There are peaks of every size and shape.

Many, like Coney Mountain, have beautiful views. Here I am on the summit of Coney Mountain. The 360-degree view is magnificent, sweetened by the satisfaction of having trekked long and hard to get there.

My good friend Aimee promised me there was a Starbucks cafe at the summit. She lied. :) 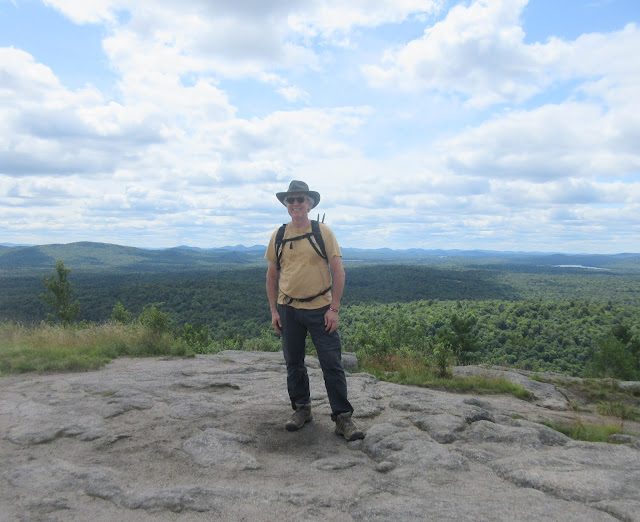 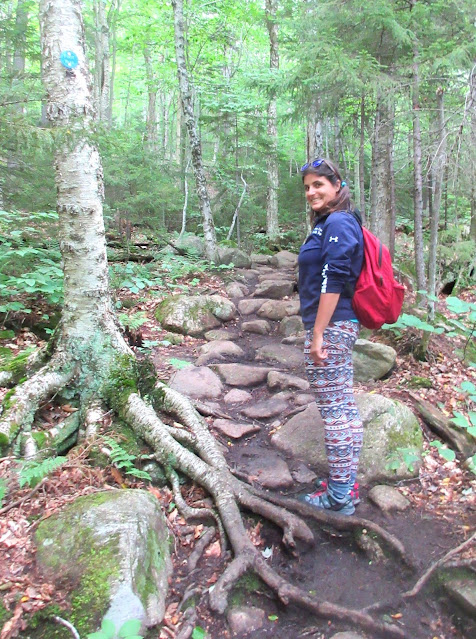 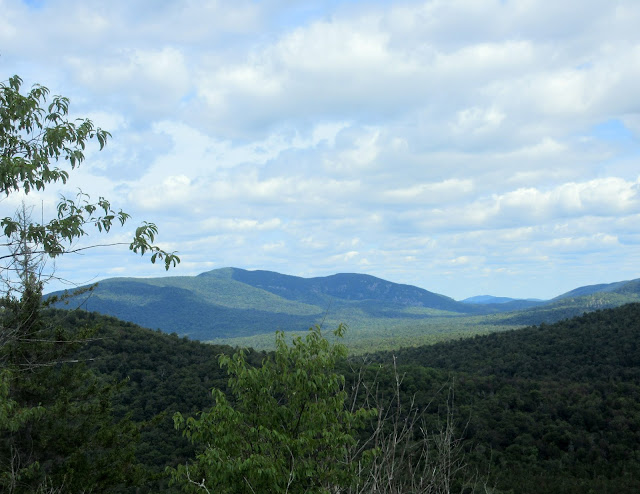