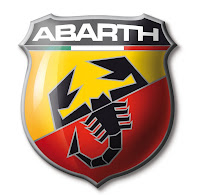 I bought a new car!

I'm excited because it's the first time in my (long) life that I ever bought a new car for myself.  Twice I bought new cars for women in my life, but never for myself.  (I tend to treat others better than I treat myself.)

Also, it's been almost three years since I've had any automobile, new or used.  During that period, I've been riding motorcycles every day.  As much as I enjoy that, there are days in Winter when the weather sucks and you really don't want to suffer the way I have.

So... I bought a 2013 Abarth!  If you're scratching your head, let me say you've probably already seen one of these.  There is a popular TV commercial showing Charlie Sheen driving like crazy inside his mansion while under house-arrest.  It's an Abarth he's driving.  In fact, the commercial is an ad for Abarth.

Abarth is pronounced "A-Bart"; the "h" is silent.  The name of the car is a tribute to Carlo Abarth who was a famous race-car designer a half-century ago.  He took small cars and magically made them go really fast.  His emblem is a scorpion on a yellow/red badge; he chose the scorpion because astrologically he's a Scorpio.  So am I.  Is that destiny or what?

The car is manufactured by Fiat, an Italian company which is bigger than you think.  They recently bought and now own Chrysler.  A few years ago, Fiat resurrected the Abarth brand and use it for the racing version of their normal car.  The Abarth is more powerful than a standard model and is often taken by enthusiasts to the racetrack.  The suspension is stiffer which helps the car corner better.  Reviewers say the exhaust sounds better than any other car except for a Ferrari.  It's a throaty growl, as I heard today.  The car has a manual transmission so you can really rev the engine to hear it roar.

I got the car in black with red accents (stripes, mirrors and seats).  It won't be ready for a month or two; the elves are still assembling it in the factory.

I love manual transmissions 'cause you are actively engaged in operating the vehicle and can play with the engine/transmission.  You can rev much higher than an automatic before shifting and, if you're so inclined, spin the wheels until they smoke.  It's heady to explore the outer limits of a vehicle's capabilities.

What do you think of my new car?  Isn't she pretty?! 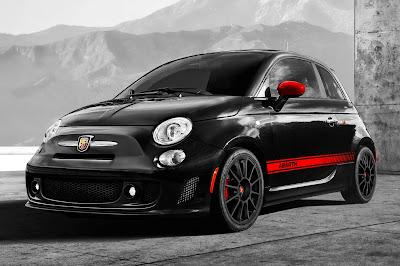 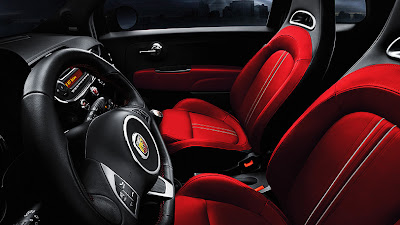