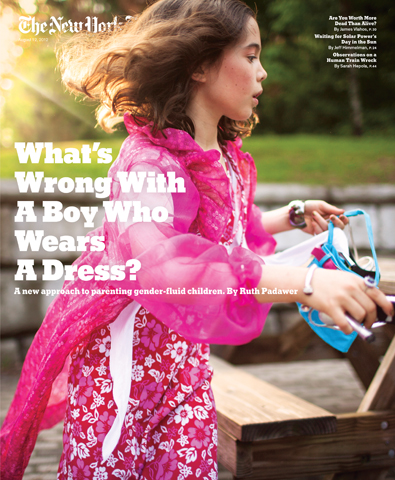 It's hard to have a transgendered child.  Every parent wants their offspring to be happy and most believe gender non-conformity threatens that.  In the past, parents reacted -- with the approval of the medical community -- by prohibiting and punishing "incorrect" expression of gender.  That approach, I can tell you from personal experience, neither works nor leads to happiness.
Recently, with new encouragement from mental health professionals, parents are being urged to allow their children freedom to explore non-conforming gender expression, especially in early youth.  Social activists support this as well.  The New York Times devoted a lengthy article to this issue, promoted on the cover of their Sunday magazine, and reported that children allowed to be themselves are happy.  Very happy.  The article mentioned a summer camp where TG children can go to explore gender variance in the company of others like them.

A little while ago, a story surfaced (here) about a German family whose young son wants to wear dresses.  The son insists on expressing himself in feminine clothing and his parents have chosen to allow it.

What sets this story apart is surprising support the boy receives from his father.  When the family lived in a city (West Berlin), the child's preference wasn't a big deal but, when the family moved to a small town, the entire community gossiped about it and made it into a huge problem.  The father, to show public support of his son in front of the small-minded villagers, started appearing in public with his son WEARING A SKIRT.  Implicitly supporting his son's choice of dresses, dad wore a skirt to show people there is nothing wrong or bad about female dress.

It's a rare man who can be so mature as to do this for his child.  Here's a picture... 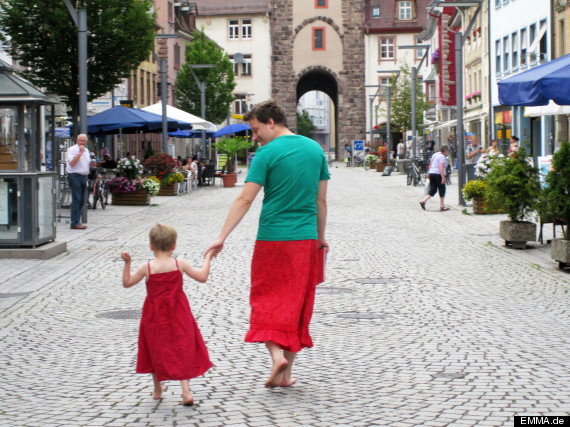 P.S., For a terrific drama on this subject, see "Ma Vie En Rose".

P.P.S., Thanks, Michi, for alerting me to this inspiring story with your tweet.
Posted by Shybiker at 12:55 PM