Well, This Is Awkward...

I've had two long-term relationships in my life.  The first one ended in the mid-1990's and the second one started around 2000.  There were a few years in the late 1990's when I was single and romantically unattached.

During that period, my interest in motorcycles emerged and grew into a passion.  I rode all the time, met others who ride, and took numerous passengers for their first ride on a motorcycle.  Here a picture of me from back then. 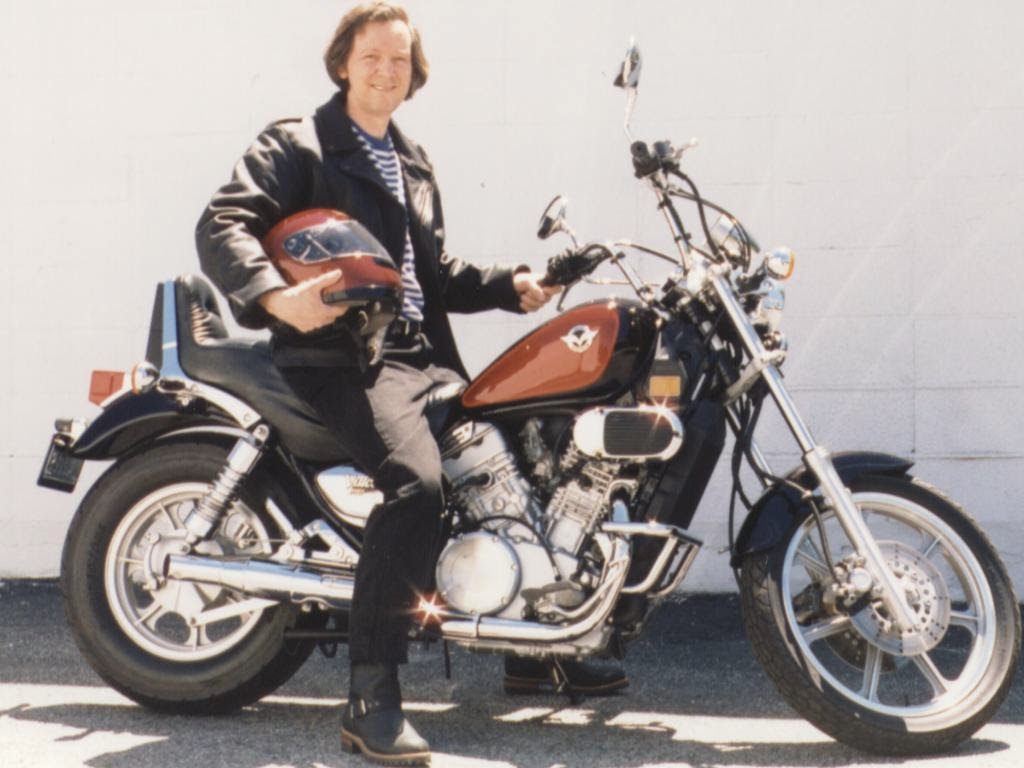 During that period, I went to a festival of art-films.  I arrived by bike, which was obvious from my carrying a helmet, and a middle-aged woman approached me.  She asked me about my motorcycle; we talked about riding; she told me of her lifelong attraction to motorcycles and said she'd never been on one.  I gave her information and advice on how to get into the activity.  Later, I met her a few times for coffee and took her on a few short motorcycle-rides.  She seemed to enjoy them and I thought we were friends.

I didn't feel any romantic chemistry and assumed it wasn't there.

Later, we corresponded occasionally by e-mail.  I hadn't heard from her in a few years when she wrote me last week.  She said she'd gotten married, which I said was nice.  She said she'd written a memoir about her life; I said that was nice.  She mentioned that I am in her memoir.  I was surprised since I didn't know I'd played any kind of significant role in her life.  We are casual friends who went on a few motorcycle-rides and had lost touch over the years.

She sent me her memoir.  Oh, my...  In it, she confesses in great detail to an infatuation she had for me.  From our first meeting, she had feelings of intense romantic attraction.  I was completely unaware of those feelings.  I remember the particular events she describes but perceived them in a totally-different way.

Has this ever happened to you?  Is it possible for one person to secretly be attracted to another without the other person knowing it?

I'm not going to reveal any more about this woman, except to quote a portion of her memoir that concerns motorcycling.  She asked if I was okay with her publishing it and I said she can print anything she wants.  We're all entitled to our perceptions and should be free to express them to the world.  Here's what she wrote:


I asked Ralph to take me for a ride.  It was a clear, crisp day in the fall of 1997, I was soon to be 41.  I wore the closest things I had in my closet to what I though was biker babe gear: a Members Only leather jacket, flat, soft leather boots, and a leopard patterned scarf.  What was I thinking?!

I met Ralph in the parking lot of his office.  He had an extra helmet, which was much bigger than my head.  He got on the bike, and I climbed on in back of him.  Climbing on was not that easy.  I’m short, plump and awkward, and I held tightly to his shoulders while I stepped on the peg and swung my leg over the seat.  It was all Ralph could do to keep the bike stable.

We started out of the parking lot and my stomach dropped to the street; I had a moment of sheer terror.  As Ralph drove through town, my body became the wind or the wind became my body or maybe the wind just blew around my hair, but my body was having an out of body experience.  There is that moment after orgasm, usually a very short moment, when nothing matters, where your body has just melted into the mattress and only good exists in the world.   I melted into Ralph and the motorcycle seat and sniffed his leather jacket until the smell surrounded me.

We stopped at a Starbucks for coffee, and so Ralph could check in to make sure I was all right.  I had no words, I was speechless, and I was overwhelmed by the experience.  We got back on the bike, rode around some more, and Ralph drove me back to the parking lot.  When he asked me again about my reaction, I said, I had a vibrating machine between my legs and I was wrapped around your body.  How bad could it be?  Over dinner, Ralph pressed me to be more specific about how riding the bike felt.  I tried to articulate my experience, but could find only the most trite expressions to describe how I felt: I was one with the universe, I felt an extraordinary sense of freedom, I was hooked.  The smell of leather and gasoline had become the most powerful aphrodisiacs I had ever experienced.
Posted by Shybiker at 3:59 PM