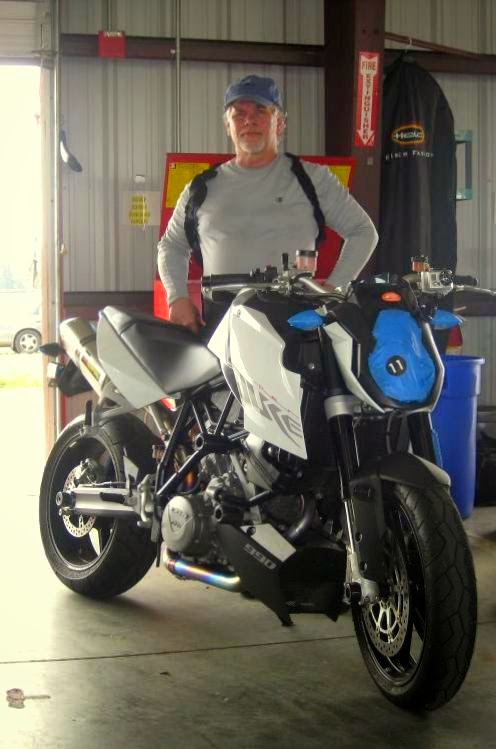 I tweeted yesterday about my friend Jim.  Last Sunday, he got in a motorcycle accident.  He was riding down the road, minding his own business, when a car suddenly turned left in front of him and blocked his path.  This is the most common scenario of car/motorcycle crashes.  The driver always claims they "didn't see" the motorcycle but that's just a lame excuse for not paying attention.

I've known Jim for fifteen years.  He and his wife Jan are wonderful friends.  I've gone on long-distance motorcycle trips with them (e.g., Nova Scotia) and enjoy their company.  Jim is certainly one of the best riders I know -- he's ridden motorcycles for 45 years and this is his first accident.  He and Jan toured Europe on motorcycle and have visited almost every State in this country by bike.

Jim always has at least three motorcycles in his garage and, in this accident, he was riding the fastest, most technologically advanced sportbike in existence today (BMW S1000RR).  Jim doesn't mind spending $30,000+ on a motorcycle and he replaces his bikes every year or two.  Visiting his garage is an opportunity to check out the coolest machines on the market.

Jim takes his bikes to a professional racetrack a dozen times a year.  It was at his urging that I joined him at the track for the first time two years ago.  I had a blast and blogged about it.

Anyway, getting to the point...  when Jim realized he was going to hit the car, he instantly braked and scrubbed off most of his speed.  (The brakes on that bike are phenomenal.)  He'd been travelling the speed-limit of 40mph and was able to reduce his momentum to half of that.  Nonetheless, there was an impact and he banged himself up good.  Fortunately, nothing was seriously broken and he has only one area of bad road-rash (abrasion) which is the equivalent of second-degree burn.  Of course Jim wears top-notch gear and that protected his body significantly.  He spent a night in a hospital for observation because he lost consciousness and they worried about possible brain damage; that turned out fine.  Whatever brain damage he has was pre-existing.  :-)

I went over to Jim and Jan's house last night.  We ate pizza, drank beer and chatted about everything.  It was reassuring to see Jim is basically okay; he just needs to heal.  Jim joked about getting (imaginary) sponge-baths from his attractive nurse at the hospital.  Jan played along; their union is one of the closest I've ever seen.  They are two people completely in synch with each other.  They will be together for life.

Oh, did I mention?  The motorcycle I rode over to their house (BMW K1200LT) is one I bought from Jim a decade ago when he was impatient to buy a newer bike.  My motorcycle practically rode itself over to Jim's when it realized it was returning home.

I know many of you fashion-bloggers may not have any interest in motorcycles, but this is my blog and I want to share my day.  Before I saw Jim in person last night, I was genuinely worried about him.  As careful as we are when we ride, the potential for serious harm always looms over us.

Have you ever been in an accident?
Posted by Shybiker at 8:33 AM