Name a bad-girl, my age, who still rocks with abandon...  Joan Jett! 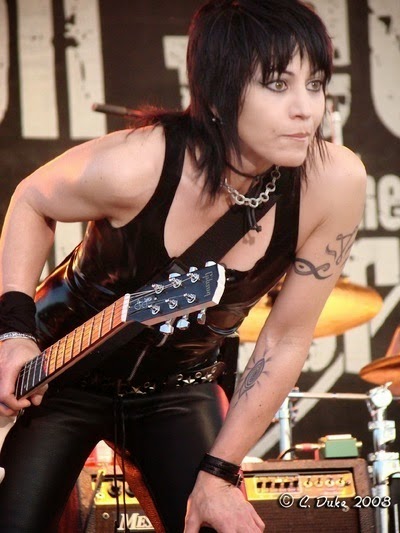 I recently saw the movie "CBGB" and it reminded me of my love for Joan Jett.  Joan's been battling in the male-dominated world of rock music since the Seventies.  She started with Cherie Currie in their band, "The Runaways;" she's done solo work; and she skyrocketed to fame with "Joan Jett and the Blackhearts."

Regardless of how young you are, you've likely heard her hits -- "I Love Rock 'n' Roll"; "Bad Reputation"; and "Cherry Bomb".

Joan created an iconic persona of bad-girl: black leather jacket; black pants; signature hairdo and heavy eye-makeup.  Her look has shifted a little over the years but stayed recognizable.

Motivated by a concern for animal welfare, Joan's been a vegetarian her whole adult-life.

There's been rampant speculation during Joan's long career about her sexual orientation.  Joan's always refused to comment on that subject or release any private information.  As someone who intimately understands that situation, I saw good for her.  We're all entitled to privacy.  Just 'cause people enjoy our work doesn't entitle them to know who we're loving and bedding.

Do you know Joan Jett?  Do you like her music?
Posted by Shybiker at 8:46 AM