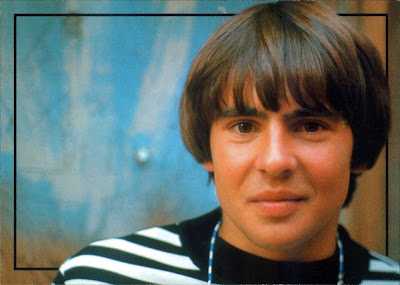 Before Justin Bieber, before the Jonas brothers, before Shaun Cassidy, there was Davy Jones.  He burst onto the scene in the late 1960's as lead singer of "The Monkees".  Davy instantly won the hearts of millions of young girls and became the heart-throb of his generation.  Magazines put him on their cover, posters were made of him, and thousands of girls wrote "Mrs. Davy Jones" on their school notebooks.

Davy had boyish good looks and an appealing innocence.  He made an ideal imaginary boyfriend.  Millions of girls grew up dreaming of Davy as their first love.

Who was your first heart-throb?
Posted by Shybiker at 8:13 PM