Queen For A Day

I don't know if you guys do this, but I often play with clothes to experiment.  I want to see if certain things look good on me.  I'm often surprised at the results, in both directions, because they frequently differ from my expectations.

For this reason, I'll sometimes pick up a dress at the thrift-store simply to explore possibilities.  This dress, for example.  I'll rarely, if ever, have the opportunity to wear such a formal gown but it was only $6 and that was cheap enough for me to play with it.  In truth, I learned several lessons from wearing it.

Do you ever try clothes on, just to see how they'll look? 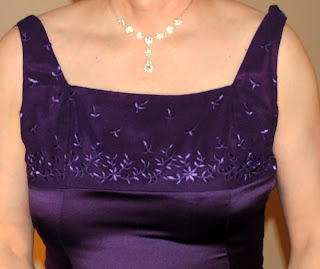 ﻿Oh, and for you young ones who don't know the cultural reference of the title, it's an interesting story.
"Queen For A Day" started out as a radio show in the 1950's and later became a TV show in the early 1960's.  It was a forerunner of the reality-tv of today.
On the show, female contestants who had lived hard lives were asked questions about themselves.  A live audience of women voted (by clapping) who it liked the most.  The audience usually rewarded women who had endured the most difficult troubles with the most positive attitude.  Some of the contestants cried while talking about their lives.
The winner was then crowned with a literal crown, wrapped in a sable-trimmed robe, seated on a throne and given a dozen roses.  They were, in all appearances, made "Queen For A Day."
I only got a purple gown, but a girl can dream, can't she?
Posted by Shybiker at 11:37 PM