Trial and Error... Lots of Error 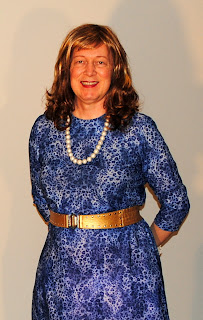 I experiment.  I learn.  I grow.  I also make mistakes.

Sometimes things come together with an outfit.  And sometimes they don't.  I started off here with a blue leopard-print dress I picked up at a thrift-store.  I grabbed it because (1) it's blue leopard-print and (2) it was only $6.  I figured -- mistakenly -- it'd be a snazzy piece, easy to build an outfit around.  I was wrong.

The first time I tried it on, it looked awful.  Matronly.  How could blue leopard-print be boring?  The cut of the dress is terrible and it just hung on me like a sack.  And, despite being blue leopard-print, it lacked punch.  It was dull.

I tried to overcome these deficiencies but with mixed success.  I added a petticoat underneath it which added fullness to the skirt and improved the silhouette.  That worked.

My efforts to perk up the dullness, however, failed.  I added color (mustard tights, gold flats, gold belt) and white gloves but those items look awkward next to the blue leopard-print.  They don't mesh.  I initially thought blue leopard-print would be inherently pretty but, instead, it became a hurdle I was trying to jump.  And I couldn't get high enough to clear it.

I feel that I fell on my face with this outfit.  I've had a string of hits lately so I was getting cocky.  I guess this is the Fashion God's way of making me humble again.  Back to the drawing-board...