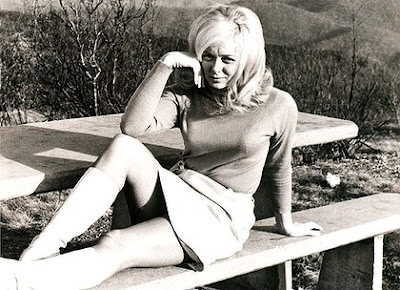 Life is strange and people can be even stranger.  I just saw a documentary about a woman whose story is so bizarre you can hardly believe it -- but it's true.  Or, at least, parts of it are true.  The filmmaker presents several viewpoints of the story (like "Rashomon") and you get to choose which you believe and which blow your mind.  In his glowing review of the film, Robert Ebert says it illustrates "the impenetrable strangeness of reality."

I have to keep repeating that this is a true story or else you won't believe it.

In 1977, a young woman named Joyce fell in love with a Mormon man named Kirk.  They talked about getting married and having kids.  Then, unexpectedly, Kirk disappeared.  Vanished.

Distraught, Joyce hired a private eye to find him and Kirk was located in London where he was on a mission with fellow-Mormons.  Obviously, Kirk's family was unhappy about Kirk's romance with Joyce, who had won beauty pageants and looked very un-Mormonlike, and arranged for his departure to end that relationship.

Joyce, who is interviewed throughout the film, traveled to England with a male friend and a beefy bodyguard she hired.  She locates Kirk and, using a fake gun, forces him to go with her to a remote country motel.  Alone at the motel, Joyce ties Kirk to the bed, feeds him his favorite foods, and makes love to him seven times over three days.  She describes their time together as being like a honeymoon with the man she loves.

Later, they return to London and Kirk discovers that his name is in the paper as missing.  He contacts his Mormon colleagues and, ashamed of having had premarital sex which is taboo in his religion, blames Joyce for his weekend adventure.  Joyce is arrested and imprisoned in England for several months accused of kidnapping.

The story became a huge tabloid controversy in Britain at the time.  Everyone was talking about the blonde beauty who kidnapped a religious man and forced him to have sex with her.  The episode was called the "Mormon Sex In Chains" story and can be read about today on Wikipedia (here).

The idea that a woman could "rape" a man was widely discussed.  Most men ridiculed the notion as impossible.  Joyce says their sex was consensual and that you "can't push a marshmallow into a parking meter."

After a few months in prison, Joyce was released on bail.  Before her trial, she escaped England and, pretending to be deaf, flew to Canada and made it back to America.  She continues to protest her innocence and says Kirk is the only man she ever loved.

As odd as this all sounds, it doesn't end there.  Five years ago, Joyce spent $150,000 to pay a doctor in South Korea to clone her beloved dog who died.  The cloning worked and Joyce was again in the news.  At first she denied she was the same person but eventually she admitted it.

The film, made in 2010, is well-done and entertaining.  You're constantly trying to make sense out of conflicting information and decide who to believe.  The story is so wacky and the people in it are truly crazy.

Question: Do you believe a woman can force a man to have sex with her?
Posted by Shybiker at 11:30 AM