I'm so excited!  On Sunday, I'm going to see a musical I've had tickets for since August: "Million Dollar Quartet."  Have you heard of it? 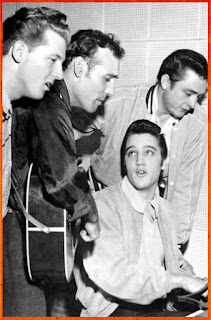 The show is based on a true event: a jam-session of four musical legends before they became famous.  One day in December 1956, Elvis Presley, Johnny Cash, Carl Perkins and Jerry Lee Lewis met at Sun Record studio in Memphis.  Sam Phillips, the brains behind that powerhouse, brought them together and invited them to play together.  The result was magic.

We have second-row seats (I put a high value on good seats) and the reviews of the show have been raves.  The show received three Tony nominations, including for Best Musical.

Last year I went to Memphis on a BBQ tour and visited the studio where this happened.  It was amazing.  The place still has the same acoustic tiles, flooring and ceiling as when those legends sang there.  There is a palpable sense of history and cool pervading the space.  I wrote about that trip a while back on my old blog.

Do you like live theater?  What good plays or musicals have you seen?
Posted by Shybiker at 12:19 AM