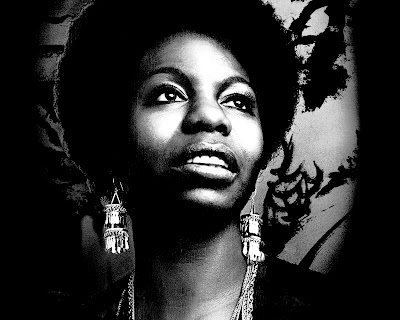 I just saw a terrific documentary about one of my favorite artists, Nina Simone. The movie ("What Happened, Miss Simone?") was nominated for an Oscar and accurately portrays a complex character. (It can be seen on Netflix.)

Nina Simone (1933-2003) was classically-trained in piano and became popular for soulful songs in the 1950's. Her life, however, was troubled and her career tumultuous. I've long been attracted to Simone's rare genius -- musical artistry at its highest level. Nina communicates emotion in her music with palpable heart and soul.

Born in the segregated South, Nina grew up poor and black. She climbed to commercial popularity with the help of a tough husband who, while steering her career toward success, physically beat her. Unfortunately Nina had bipolar disorder (manic depression) which disabled her from making smart choices. She stayed with her husband for years, despite being abused.

Nina dove into the civil rights movement in the 1960's where she found personal fulfillment. She learned from and developed friendships with many famous black leaders, writers and intellectuals, like Martin Luther King, Jr., Malcolm X, James Baldwin and Lorraine Hansberry. She sang at political rallies (including the famous Selma march) and wrote inflammatory songs like "Mississippi Goddam." Nina's career later cratered, however, from her focus on racial politics; some in the music industry blacklisted her for the fervor of her politics.

Nina recorded 40 records and gave innumerable performances, including at Carnegie Hall. After disappearing for a while, she made a comeback with poignant performances.

If you've never heard Nina sing, you are in for a treat. My favorite song of hers ("Sinnerman") is used in the climactic scene of the film, "The Thomas Crown Affair" (1999). And check out the documentary of her life: you'll be moved.
Posted by Shybiker at 12:25 AM