My Best Picture Ever

Two years ago, I created an image that I am very proud of.  It is the pinnacle of my photographic efforts.  Most of you weren't around back then to see it, so allow me to pull the image from the vault of history and show it to you now.

The idea for the picture was creative.  I had just bought several pairs of leggings and wanted to show them off.  I was looking for a novel way to do that.  I found one.

What's impressive about this picture is not just its clever conception but the execution required to achieve the image.  I was both model and photographer.  I took the picture with no help, using only a tripod and remote shutter-release (which you press the button of and have three seconds to pose).  I pressed the button and scrambled into position -- a maneuver that literally took athletic effort.  I was exhausted at the end of the photoshoot.  But the result was worth it.

I was so happy with this that I created greeting cards and posters with the image, which I've mailed to my close friends.  You can get them too here: http://www.cafepress.com/shybiker

What do you think of the picture?? 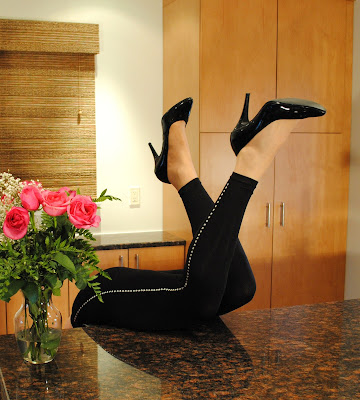