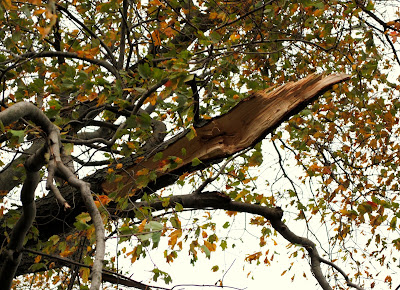 Hurricane Sandy arrived Monday.  She was bad.  The hardest part now is dealing with loss of electricity.  You can't do anything these days without electricity.  Ninety percent of Long Island was knocked out and restoration will be slow.  Days, even a week.  I'm finally able to post this by using battery power and a public WiFi.  I'm still out of power at home and my office.

The winds were fierce.  I stayed at work until the last minute on Monday, which was foolish because going home was rough -- I had to run an obstacle course with downed trees everywhere.  Several times they completely blocked the road and I had to double-back.  I made it, though.

Almost every block has entire trees uprooted.  Many pulled down power-lines.

At home, a big branch broke off the tree in front of my house, blocking the walkway.  Despite it weighing hundreds of pounds, I dragged it off to clear a path.  Doing so, I fell twice on my ass and sprained 27 muscles.  I've been accused in the past of being a "macho idiot" at times and I stand convicted.  When situations call for it, I pull out my boy-side.

I hope you all are okay.
Posted by Shybiker at 2:36 PM