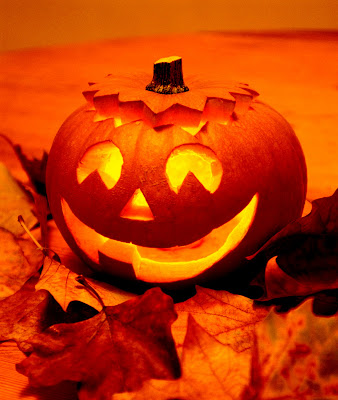 ﻿
﻿
I played a Halloween joke on Robin last night that turned out great. It's a prank designed for children but, hey, Robin was naive enough to fall for it.

The idea came to me when Robin said she'd never carved a pumpkin. That meant she didn't know what to expect when doing it. I bought a pumpkin, brought it home, and last night we carved it.

Before doing so, I secretly slit a tiny hole in the bottom with a knife, slid a dozen coins into the pumpkin, and patched up the hole.

So, I told Robin the first thing we need to do is cut the top off and scoop out the innards. As Robin was pulling pumpkin-guts out with her hand, she saw money! Coins everywhere! Nickels and dimes and pennies. She squealed in delight and looked at me for explanation. I said, "You got a Money Pumpkin! Those are the special ones."

Then Robin spent ten minutes racking her brain trying to figure out how the farmers got money into their pumpkins. She wondered if they used special seeds, if they sprinkled coins while the pumpkins were growing up... she couldn't figure it out. Finally, I couldn't conceal my glee any longer and told her the secret. She slapped her forehead and couldn't believe how silly she had been.  She admitted I really tricked her and she conceded it was a funny joke.
Do you have any favorite Halloween tricks?
Posted by Shybiker at 9:08 AM