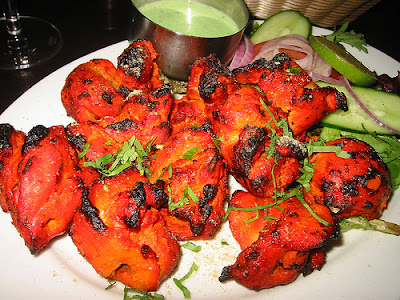 I love good food and am adventurous in my dining.  Fortunately, New York has a panoply of places to eat of every ethnicity.

One of my favorite cuisines is Northern Indian food.  I especially love Tandoori cooking, which uses a clay oven markedly hotter than a conventional oven.  It sears food like grilling does -- extreme high heat cooks the outside of food with delicious crispiness while trapping moisture inside.  Plus, food put into a Tandoori oven is marinated in spices and often coated with an attractive orange glaze.

Last night I went to a great Indian restaurant on Long Island (Rangmahal).  I had Tandoori vegetables which were phenomenal.  I cook fairly well, but could never make anything as tasty as this.

I also tried something new and different. "Lassi" is a yogurt drink similar to a smoothie.  It is usually offered in fruit flavors like mango or strawberry.  Real Indians drink it savory with salt.  The restaurant last night offered lassi in a flavor I'd never seen before: green chili!

When I ordered it, the waiter warned, "Are you sure?  It has a real kick."  I said, go ahead, hit me. It was delicious. The flavor was like a cup of hot chili peppers had been put in a blender: the taste of pure green chili peppers. And, yes, it had a serious kick which is totally unexpected in a yogurt drink.

Have you ever eaten Indian food?  Or anything else different lately?
Posted by Shybiker at 6:52 PM