I'm going to tell you some surprising truths.

Different art-media have different focuses.  Intellectual exploration works well in literature.  There's the time and space to do that there.  Films don't have that luxury and, instead, work best with emotions.  They have the capability to draw us in and make us empathize with characters.  Which is why, in my opinion, female filmmakers are the best artists in that medium.

My favorite American filmmaker is Nicole Holofcener.  Her films are sensitive examinations of human relationships.

One of the best international filmmakers is Susanne Bier.  Her films depict emotions with a degree of understanding and depth that surpasses most Hollywood movies. Despite working in Denmark, she has won an American Oscar and been nominated for a second. 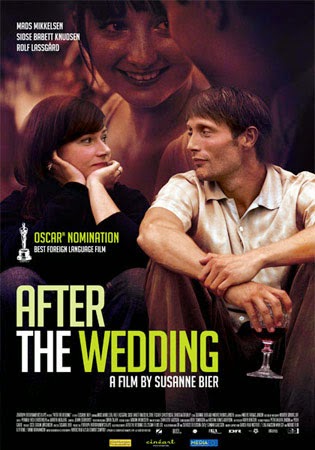 I just saw one of Susanne's films ("After The Wedding") and was blown away.  At the beginning, you think the film will be about the poor, but it isn't.  Then you believe it's going to be about the extreme width of wealth in the world, but it isn't.  The film ends up being an intense family drama with great surprise and penetrating insight.  You can't predict what's going to happen one moment to the next and are completely engrossed in the plot and characters. I'll admit to crying at times and being utterly shocked during others.

I can't say any more about it without ruining the surprise, but trust me when I say this is one of the best films you'll ever see.  It was nominated for an Oscar in 2006 as Best Foreign Film of the Year.  (Five years later, Susanne won the Oscar in that category for "In A Better World.")

The movie stars internationally-recognized actor Mads Mikkelsen.  Despite his unattractive looks (Hollywood cast him as a villain in a James Bond movie), Mad has sizeable talent. I first saw him in Danish movies, then on American television where he currently stars as the lead character in "Hannibal."

Check out "After The Wedding."  You'll be deeply moved.
Posted by Shybiker at 10:07 PM