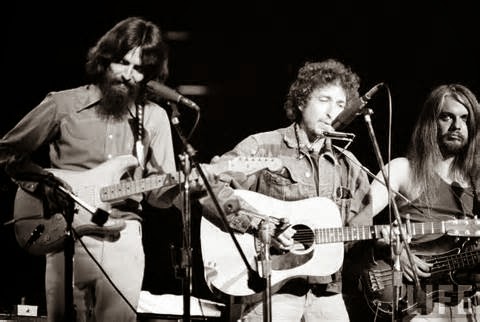 It's interesting how we can live through something and not really know it.  For example, in the Seventies, I heard about George Harrison's "Concert for Bangladesh" (1971) but I didn't see it or hear its music.  At the time, I was in ninth grade, living an hour away from the concert (which was held in Madison Square Garden in NYC).  This weekend, I finally caught up with it.

My trip to the past was facilitated by my recent re-embrace of vinyl.  I found a 40-year old boxed set of (three) records of the concert, complete with photos.

The concert, thrown together quickly,  drew attention to the plight of refugees in Bangladesh (formerly East Pakistan).  The concert attracted big names, like Ringo Starr, Bob Dylan, Eric Clapton, Billy Preston and Leon Russell.  None of the performers were paid.  Clapton was visibly sick from heroin withdrawal.

The concert was the forerunner of future charity benefits, like Live Aid, et al.  Most people tuned it because it was George Harrison's first appearance since The Beatles had broken up two years earlier.  Seeing him back with Ringo was a major thrill.

George performed some Beatles songs and wrote the title song, "Bangla Desh".  After listening to the entire concert thrice, I say Leon Russell steals the show with his cover of "Jumpin Jack Flash."  He got the place rockin' at high volume.

Have you heard about this event?
Posted by Shybiker at 8:34 AM