I love to cook and I love spicy peppers.  Recently, I've been combining the two. 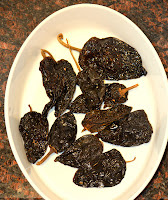 Today, I was in a new gourmet store which has dried peppers from Mexico.  I bought the "Dried Chile Ancho" which are actually dried poblano peppers.  Here's a picture of what they look like on the left.

Ancho peppers are sun-dried and as healthy as nature made them.  They have mild to medium heat with a sweet fruity flavor; the flavor reminds you of cherries and prunes.  The peppers are used often in Mexican cooking, such as mole (which is a dark sauce containing peppers and chocolate -- yes, chocolate!).

Not all peppers are spicy.  Anchos, for example, are quite mild.  I add them for flavor, not heat.

Two other popular peppers you should know are spicy.  They are jalapenos and habaneros.  Jalapenos, despite their reputation, are only medium-heat.  I eat them raw and whole.  They have a nice vegetably flavor which matches their green color.  You can toss a few in any dish to improve its flavor.  They add a modicum of heat. 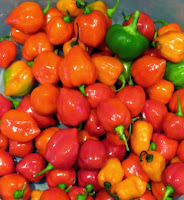 Habaneros are another story.  They are at the top of the pepper pile.  They are very, very hot.  Let me say that once more, as a warning -- they are very, very hot!  One small pepper will make an entire pot of food searingly hot.  Habaneros are what I received as a gift recently and what I used to make hot sauce.  I turned thirty of these potent suckers into less than a cup of hot sauce, meaning the sauce is intensely spicy.

Do you ever cook with peppers?  Or hot sauce?
Posted by Shybiker at 12:41 PM