Today, I watched "42", a movie about Jackie Robinson.  Jackie Robinson was the first African-American to play baseball in the major leagues.  This film about his life, released in April, is well-made and moving. 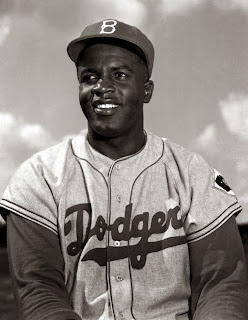 For the first six decades of baseball's history, the sport was segregated: blacks were not allowed to play in the major leagues.  In 1947, Jackie Robinson was hired to play for the Brooklyn Dodgers in a surprise move by Branch Rickey (portrayed by Harrison Ford in the film).

Robinson's debut was rough: at first, his fellow-teammates tried to keep him off the team and signed a petition against him.  Later, during the season, Robinson was thrown at by pitchers (he was hit more often than any other player) and he was repeatedly and brutally taunted by opponents and fans.  One man, the manager of the Phillies, became infamous for openly and viciously abusing Robinson on the playing field.

With great restraint, Robinson refused to combat those assaults.  That was the smartest thing he could do.  Any retaliation would have been harshly criticized and would have jeopardized his (and future black players') participation in the sport.  Robinson's mere presence on the field was inflammatory to many people.  They needed little excuse to shout for his ouster.  Robinson gave them none.

Bigotry is ugly.  It combines ignorance with stupidity -- and I use those words in their technical, not pejorative sense.  Ignorance is not knowing something; stupidity is not caring about the limit of your knowledge.  People are wrong to judge others by projecting traits they believe belong to a racial, religious or gender group.  We are individuals.

Confronting and overcoming prejudice is hard.  This movie explores how it was done in baseball.  Moving society from one attitude to another generates some friction.  A sport closely studied by a large part of the population, baseball was influential in affecting popular opinion on race.  Many historians cite the integration of baseball as one of the beginnings of the modern civil rights movement.

To its credit, Major League Baseball has honored Jackie Robinson's exceptional courage and skill.  In addition to inducting him into the Baseball Hall of Fame, MLB permanently retired his number (42).  Now, every April, there's a baseball game where every player wears number 42 in tribute to Jackie Robinson.

Do you know about Jackie Robinson?  Whether you do or don't, I strongly recommend seeing this movie.  The history it depicts is important and continues to affect our lives today.