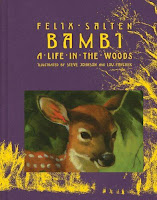 Some stories become more and more fascinating the deeper we get into them. One such story concerns history with which you're partially familiar.

Exactly a century ago European writer Felix Salten published a novel (1922). It was acclaimed and made the author famous. The book, "Bambi: A Life In The Woods," was a best-seller. Today, Salten's novel is forgotten; it was overshadowed by Walt Disney's later animation which bowdlerized Salten's story.

The novel -- written for adults, not children -- is a remarkable work of real imagination. It depicts the state of nature and confronts major issues of existential importance. My favorite chapter is one in which two leaves discuss what death will be like as they watch their companions wither and fall off a tree. "Do we feel anything, do we know anything about ourselves when we're down there?"

Some readers interpret Salten's "Bambi" as an allegory for the plight of Jews in Nazi Germany. In fact, the Nazis banned and burned the book. I, however, agree with a New Yorker magazine writer in the current issue; I don't read the book that way. There is political depth to the novel but that wasn't Salten's focus.

Can the story of an interesting book obscured by a cartoon adaptation get more interesting? Yes, it can. Salten's novel was translated into English by Whittaker Chambers. Why is that name familiar to us? Because Chambers was secretly an American spy for the Soviet Union during the 1930s and the center of a huge political scandal.

Chambers grew up on Long Island (in Lynbrook) and was the most talented writer-editor at prestigious Time magazine. His history includes the Alger Hiss controversy (during a House Un-American Activities Committee hearing in 1948 Chambers accused Hiss of having been a fellow Communist spy), the "Pumpkin Papers" (Chambers hid spy documents in a hollowed-out pumpkin) and, improbably, Chamber's being posthumously awarded the Presidential Medal of Freedom by Ronald Reagan in 1984. Chamber's story has more angles than a dame in a film noir drama. :)