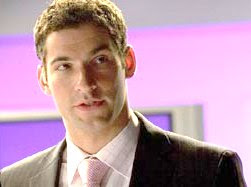 I like seeing actors popular now performing at the beginning of their careers. In 2005 British TV (BBC) did a series of modern interpretations of Shakespeare's plays ("ShakespeaRe-Told") and the cast in one is greatly amusing ("Much Ado About Nothing").

I recently binge-d all five seasons of "Lucifer" which stars Tom Ellis. He plays a terrific, distinctive character. Seeing Ellis fifteen years ago -- young as a tyro, impossibly clean-shaven, with different hair-style and accent -- is shocking. Ellis was just starting out then and is paired in the show with Billie Piper, immediately before she became a star in "Doctor Who." Billie later led "Secret Diary of a Call Girl." You also spot Olivia Colman who's the current Queen Elizabeth II in "The Crown" after appearing in the successful "Fleabag."

Stardom was right around the corner for these three but, at the time, they didn't know it. Fascinating to watch them at this juncture.