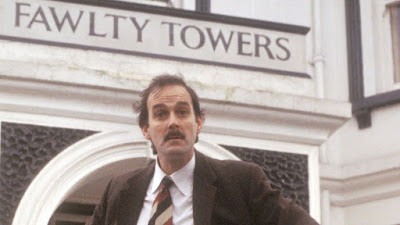 Forty five years ago today The Best Comedy of All Time premiered on British television: "Fawlty Towers." The show is painfully hilarious. John Cleese plays Basil Fawlty, an inn-keeper who makes every bad decision possible and suffers endlessly. Nobody respects Basil, his wife abuses him daily, and life treats him like dirt. Yet you laugh and laugh and laugh as you empathize with poor Basil's plight.

There are only a dozen short episodes so you can binge it in an evening. Unless you get tired of laughing. I've seen the show numerous times and keep falling over at its jokes.

The BBC says it "stands up to this day as a jewel in the BBC's comedy crown."