Playing with old cameras offers many pleasures. The cameras themselves are beautiful objects. Shooting pictures with them is a wild adventure full of surprises. And exploring their history is fascinating. I just learned something cool about my Kodak Brownie Starflex.

When I got this camera, research told me the model was manufactured from 1957 to 1964. I assumed that range of dates was the most you could learn but I just discovered it's possible to date particular cameras more precisely. Inside the camera is a hidden code which reveals the exact month each camera was made. Four letters are stamped on the metal and a secret key translates them.

My camera says "CMRS" which means this camera was made December 1957. That date has significance: I was born November 1957. This camera is the same age I am!

I bought some 127-roll film and shot a roll of black-and-white photos. Not attempting art, just doing a test-run to see if and how well the camera works. The images are sharper than I expect from a cheap plastic lens and have the characteristic muddiness of old film. These qualities give Brownie pictures their distinctive look. Here are a few I just developed. 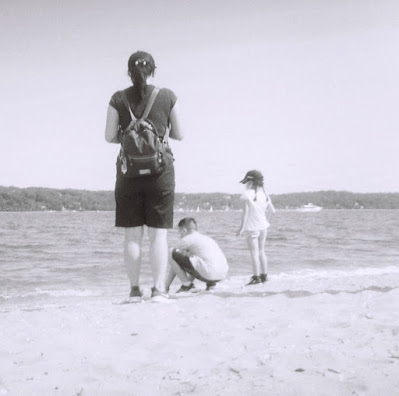