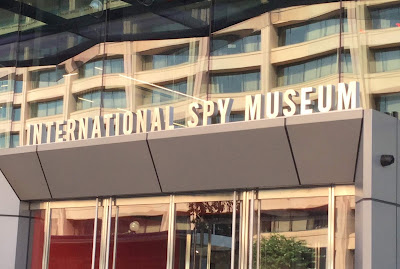 Secret Agent 008 reports the assigned mission has been successfully accomplished.

Disguised as a Canadian tourist, I infiltrated the International Spy Museum in Washington DC with ease. My cover was effective as the sight of a red-faced, slightly-alcoholic man of advanced age wearing unflattering shorts and an old hockey t-shirt drew no attention, particularly among the crowd in these parts.

Once inside the spy museum I deployed "social engineering" to locate the secret underground tunnel to the highly-restricted target area. [Note to file: Social engineering is efficacious with low-paid American workers who seem not to give a damn about obeying their capitalist oppressors' rules.]

Maneuvering through security in the tunnel was a breeze -- only one guard, a middle-aged female, asked for identification. I invited her to sniff my cologne and its tranquilizing chemicals neutralized her instantly.

Penetrating the inner sanctum, I suddenly encountered my life-long nemesis whom I've fought on numerous occasions. He still bears the scar of our last meeting when I parried his knife-thrust with the sharp edge of my Louis Vuitton handbag. [I was undercover as a shapely fashion model at the time.]

In contrast to our prior enmity, we greeted each other heartily. "Comrade," he exclaimed enthusiastically, "now we are on the same side!" Yes, I concurred; the election of a "useful idiot" has united our nations in ways unthinkable before now.

Unlike my standard assignment [blow everything up and escape with the prettiest girl] this mission ended with kimchi and vodka shots. If history repeats itself in the 2020 election, there may not be any future role for our spy agency -- unless Our Glorious Supreme Leader declares war on another failing democracy.
Posted by Shybiker at 10:00 AM