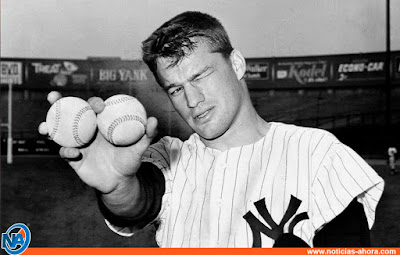 The most important book I read growing up was "Ball Four," a hugely-controversial book about baseball written by Jim Bouton who died this week (of dementia at age 80). I can't emphasize enough the impact this sports-expose had on my 13-year old self. Even today "Ball Four" is widely considered the greatest book written about baseball. It was published in 1970.

Jim Bouton was a decent pitcher with some ups and downs in the major league. He pitched well for the Yankees for a few years and ended his career throwing knuckleballs. His real contribution to the sport, however, was not on the playing field: it was revealing the truth about professional ball-players, including legends like Mickey Mantle.

What Bouton disclosed wasn't pretty. He described players routinely acting like foolish boys -- they'd peek up women's dresses, cheat on their wives, drink to excess and gobble down amphetamines. With striking immaturity they slipped mirrors under hotel-room doors to try to glimpse naked ladies, gawked at women at the ballpark, played pranks on each other and generally behaved like jerks.
Coaches were no better. Bouton described most of them as idiots who spout bromides instead of wisdom. Legends like Mantle were exposed: Bouton said Mantle often played hung-over; years later, Mantle admitted he was an alcoholic and sought treatment.

The book created a furor because the image of baseball at the time was impeccable. Players, thought to be heroes, were now seen as ordinary humans capable of indecency. Naturally the baseball establishment shunned Bouton for decades until it finally came around to realizing that telling the truth isn't a crime. In Bouton's later years he was welcomed back by MLB and even celebrated for his courage.

For me, the book showed societal loss of innocence. Many social traditions were falling at the time and baseball was simply another one. Pretending young men who play the game are better humans than they really are serves no purpose except to line the pockets of rich owners (who, themselves, cheat on their wives and engage in bad behavior). Plus, and this shouldn't be under-valued, the book is funny. Bouton was a natural comedian and his glee in pulling back the curtain on his team-mates is as amusing as it was shocking.
Posted by Shybiker at 3:11 PM