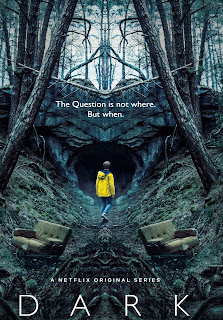 I've fallen down a rabbit-hole and don't want to leave. I'm immersed in a lengthy streaming binge on a Netflix show ("Dark") which resonates deeply with me.

I've learned to hesitate recommending entertainment to people because taste is so subjective. I'm not suggesting you watch this, just putting it on your radar in case you're inclined toward the same subjects I am.

"Dark" is a science fiction series made in Germany. That place of origin plays a big role in its appeal to me. The show is spoken in German and you can see it dubbed (wrong choice) or with English subtitles (right choice). Listening to the characters speak German resurrects the six years I spent learning that language during my youth. Wie geht es dir?

The subject of the show is time travel. Not in a superficial cheesy way but founded on actual historical texts of alchemy, hermeticism and other ancient philosophies. You can dig deep into the scientific and cultural references made and find substance. Intriguing material indeed.

The show starts in 2019, then moves 33 years earlier to 1986 (with notable changes in fashion and technology). Later the show jumps backward to 1953, then forward to 2053 and also backward to 1921. Each jump is 33 years because that's the cycle of nature when cosmic forces re-align. Everything takes place in a single small town in Germany where the characters' families have always lived.

The show is remarkable in that it has no special effects, no violence, no sex. It's drastically unlike anything else you see on the tube today. You won't recognize any of the German actors but the cast is talented and totally believable in dramatic roles.

There are two seasons out; the second was released last month. A third, final season will appear next year. At first, the show is hard to follow because there are so many characters and plots but it's worth sticking with to navigate through initial confusion. By the time you hit the second season you're fully aware of the maze of connections and entranced by where events are going.

Some of you might like "Dark," some not. It's the center of my universe right now -- at least this particular universe in the multiverse of possible existences.
Posted by Shybiker at 8:44 AM