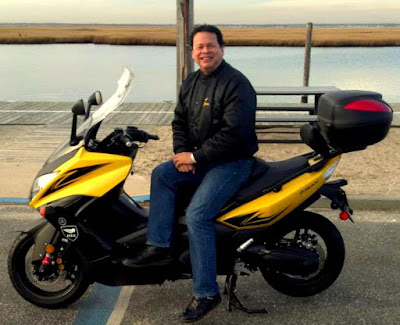 The last place you want to see a motorcycle-buddy is in the hospital. And yet that's just where I came from. My friend Jaime got in an accident last night on his way home from dinner.

Riding his Zero (electric motorcycle), Jaime was only a block from home when a car turned suddenly, without looking, and struck his motorcycle on the left side. The impact broke Jaime's leg below the knee; fortunately his top-notch gear protected him from other injury. Due to the location of the break, the doctors aren't going to put the leg in a cast; instead, they'll do surgery to install metal equipment.

A witness told police that the motorist was 100% at fault, which is fortunate because New York's no-fault law doesn't cover motorcyclists.

This event is ironic because Jaime is the safest rider I know. In addition to being highly-skilled (qualified as an instructor), Jaime rides more miles than anyone else I know (averaging over 20,000/year). Jaime is the last person I'd expect to be in an accident but, as happened in my accident on the Goethal's Bridge a decade ago, sometimes you're simply in the wrong place at the wrong time. Nothing you can do about that.