Another Reason To Love Canadians 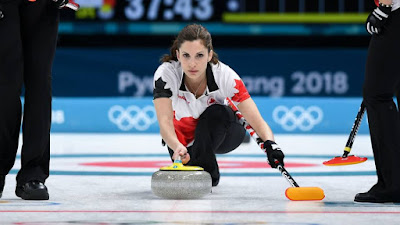 Curling is an Olympic sport. Some people who don't understand it don't respect it. The fault in that is not curling's, it's people's. Things are interesting when you know them deeply; casual dismissal comes from ignorance.

Example: Because the Winter Olympics are currently on television, many are commenting on it. Actress Kirstie Alley, while claiming that she was “not trying to be mean,” tweeted she thinks “curling is boring.” The U.S. Curling team didn't take this lying down. They responded with a tweet of their own -- "We’re not trying to be mean either but your movies weren’t exactly riveting theater Kirstie. #justsaying #curling #rockit #TeamUSA."

I'm not going to launch into a discussion of the technical aspects of this sport but want to point out two important things. First, curling, while played in several countries, is especially popular in Canada. That fact is connected to my second point -- curling has a culture. A culture of sportsmanship. That's something missing from many sports today, including our professional ones (football, baseball, basketball).

"More so than in many other team sports, good sportsmanship, often referred to as the "Spirit of Curling", is an integral part of curling....

The Spirit of Curling...leads teams to congratulate their opponents for making a good shot, strong sweeping or spectacular form. Perhaps most importantly, the Spirit of Curling dictates that one never cheers mistakes, misses or gaffes by one's opponent (unlike most team sports) and one should not celebrate one's own good shots during the game beyond modest acknowledgement of the shot such as a head nod, fist bump or thumbs-up gesture. Modest congratulation, however, may be exchanged between winning team members after the match. On-the-ice celebration is usually reserved for the winners of a major tournament after winning the final game of the championship. It is completely unacceptable to attempt to throw opposing players off their game by way of negative comment, distraction or heckling.

A match traditionally begins with players shaking hands with and saying "good curling" or "have a pleasant game" to each member of the opposing team. It is also traditional in some areas for the winning team to buy the losing team a drink after the game. Even at the highest levels of play, players are expected to call their own fouls.

It is not uncommon for a team to concede a curling match after it believes it no longer has any hope of winning. Concession is an honorable act and does not carry the stigma associated with quitting, and also allows for more socializing. To concede a match, members of the losing team offer congratulatory handshakes to the winning team. Thanks, wishes of future good luck and hugs are usually exchanged between the teams. To continue playing when a team has no realistic chance of winning can be seen as a breach of etiquette."

Thoughts? Are you watching the Olympics?
Posted by Shybiker at 10:36 AM