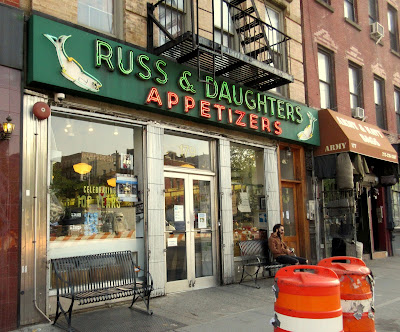 There's a cool place in Manhattan that's been in business over 100 years. It has an interesting story behind it and I went there last week.

Do you know how many companies are named "[Founder] & Sons"? Well, this store is called "Russ & Daughters." A century ago, Joel Russ traded in his pushcart and opened a food store. He had children -- but no sons. So he named his company after himself and his three daughters, Hattie, Anne and Ida. After Joel retired, his daughters took over and kept the store going. Today, the fourth generation of the family runs the place -- including one of Joel's great-granddaughters, Niki.

The store is on the Lower East Side where a large number of Jewish immigrants lived during the last century. Two years ago, the owners a cafe around the corner serving the same items for in-store dining. What do they sell? That's another story. It's an "appetizing store." What's that, you ask? Well, under Jewish law, a store that sells certain kinds of food (e.g., meat) cannot sell other kinds of food (e.g., dairy products and fish). So alongside ubiquitous New York delis were appetizing stores where you'd buy toppings to put on bagels, like cream cheese and smoked fish. Most of those stores are gone now and even once-famous delis are disappearing.

Last Thursday I ate dinner at the Russ & Daughters café with my friend Emily. In addition to charming conversation, we enjoyed a bissel of caviar, a trio of pickled herring canapes, and a Shtetl (smoked sable, goat cream cheese, tomato, onion and capers on pumpernickel bread). The fruit blintzes we had for dessert were light, sweet and delicious.

Visiting Russ & Daughters is not only a trip back in history, it's also support of female ownership and a chance to eat some delicious food. If you come to NYC, make sure to include it on your list.
Posted by Shybiker at 11:05 PM