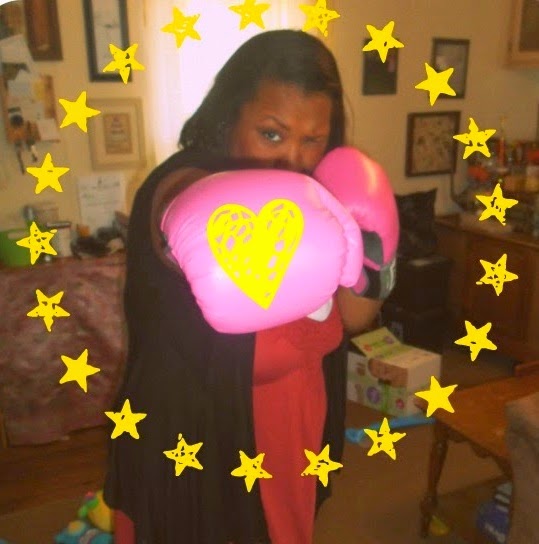 A fifth blogger is donning the magical pink boxing gloves.  After the gloves began their journey in New York, they visited Oregon, California, Louisiana and are now in the oversized state of Texas.  Wheee!!

Wearing the gloves today is Hollie, a fine blogger.  Hollie's blog (Modern Colors) describes her interesting life down South with her cute son River and her husband whom she calls "an intellectual redneck."  Hollie is pregnant with her second child, who's due to arrive this Fall.  I'm lobbying to name the baby Stream.

Hollie is a community event planner and she's deeply invested in a Renaissance Faire in Texarkana.  Seeing her talk about the Faire, raise money for it, and post pictures of great costumes is a highlight of following her.  Plus, as you can see above, Hollie has a good sense of humor.  I like her.  Go check out Hollie's blog.

If you want to add yourself to the list of glove-wearers, just leave a comment.  They're heading next to Canada for three bloggers and then over to Europe.  Yay!
Posted by Shybiker at 8:14 AM