Riding At The Track

I've been eagerly awaiting the professionally-taken photos of my experience at the track last week, but they haven't arrived yet.  Those pictures will show you some of the excitement I felt riding that day.

While we're waiting, here is a video taken by my friend Jim.  Jim has a camera mounted on his bike.  The video shows Jim riding the 13-curve track we were at that day.  The track is named "Thunderbolt," to distinguish it from neighboring track, "Lightning."

As you'll note from seeing Jim pass slower riders, Jim is an exceptionally-skilled motorcyclist.  His bike -- a rare BMW sportbike that costs $28,000 -- hit 160 mph on the straightaway and could have gone faster if that stretch was longer.  At its end, you have to make two sharp right-hand turns that necessitate slowing down to get through the curves.

Watching the video, you get a sense of the lean-angles our motorcycles are capable of.  To get through sharp curves at high speed, you need to lean over as far as possible, even to the point of dragging your knee on the road.  Hovering inches over the pavement while hurling at ridiculous speeds is scary but, if you're brave, you can savor the sensation.  Seeing this visually gives you a glimpse of the ride, but it doesn't convey many other sensations accompanying it, like the visceral thrill of acceleration, harsh vibration, physical forces pulling your body, and occasional terror.  :-) 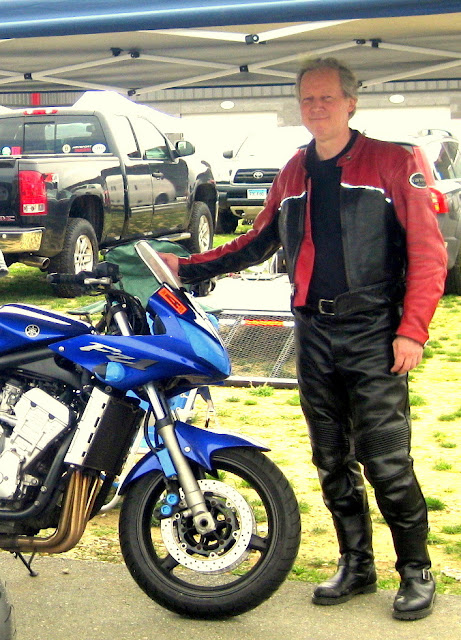