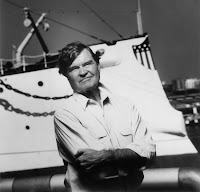 Paul Fussell was a writer and public intellectual.  He died yesterday at age 88.  Fussell and his work are worth knowing about.

Fussell started his career as an academic, writing scholarly books, but he became popular with a book about war, "The Great War and Modern Memory".  From there, his writings addressed broader audiences and non-scholarly themes.

The book that made Fussell famous described war as a horrible experience.  Fussell had fought in intense combat and witnessed buddies die next to him; in fact, their blood and guts sprayed on him.  Fussell hated how people romanticized war when, in reality, it's an ugly affair.  People get killed.  Stupidity is commonplace.

I first discovered Fussell's writing in 1983 in his comical book called, "Class: A Guide Through The American Status System"  In it, Fussell skewered American society and pulled back the cover on our social hierarchy.  He reveals our undeniable class-system with sharp humor.

The tone of this and some other books he wrote earned him a reputation as a curmudgeon.  For smart people, disappointment at our social organization is often inevitable.

If you want a good laugh or probing sociological analysis of contemporary America, pick up a copy of "Class...".
Posted by Shybiker at 6:56 PM