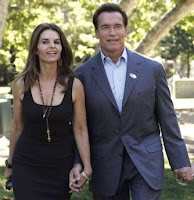 You've probably heard by now that Arnold Schwarzenegger recently admitted to secretly having a child with his housekeeper ten years ago while married to Maria Shriver.  Arnold and Maria were married 25 years ago and, after hearing this news, Maria decided to leave him.

This isn't Arnold's first infidelity.  He has admitted to groping women in public and there are several other women who say they had sex with him.  Previously, Maria conceded that Arnold sometimes acts badly toward women but she accepted his behavior.  This incident, however, went too far for her.

How Important Is Sexual Fidelity To A Relationship?
How Would You React To News Like This? ﻿
Posted by Shybiker at 5:41 PM