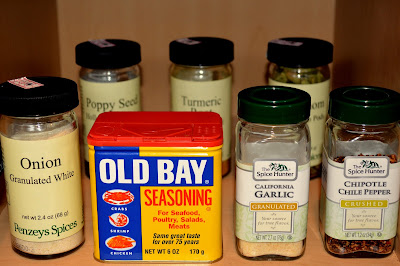 Have you ever tasted Old Bay?  If not, you're in for a treat.

Old Bay is a collection of spices that is hugely popular in Maryland and the surrounding area. People down there sprinkle it on crabs and seafood. The seasoning is equally good on everything else. It's like salt with superhuman flavor.

Last night, I sprinkled it on buttered corn-on-the-cob. It was amazing. The corn was delicious. Bursting with flavor. And the seasoning costs only $4 a can.

It's impossible to identify the main flavor in the combination because the ingredients blend and form a flavor all its own. The seasoning mix includes celery salt, bay leaf, mustard, paprika, black pepper, crushed red pepper flakes, mace, cloves, allspice, nutmeg, cardamom, and ginger.

Like many things, there's an interesting story if you look close enough. Old Bay was invented by German immigrant Gustav Brunn in 1939. He was a Jew who fled Nazi Germany to avoid persecution. In the U.S., he founded a company that prospered for decades. In 1990, he sold his company to spice-giant McCormick & Company which continues to sell Old Bay.

You can find Old Bay at Target and other stores. Just look for an old-fashioned yellow tin-can.
Posted by Shybiker at 12:57 PM