Life In The Surreal Lane

I had two bizarre experiences last week. Both made me shake my head in disbelief. Normally I lead a careful, organized life that contains routine experiences. These events were surprisingly different from that.

A concept emerged in art a century ago called Surrealism. Large-scale massacres in World War I traumatized people and, reflecting on those, artists viewed life differently. A notion of surreal experience emerged, referring to times when life seems odd. When events have hallucinatory qualities of dreams. You believe life is normal but absurd things occur without reason. Last week was full of surreality for me. 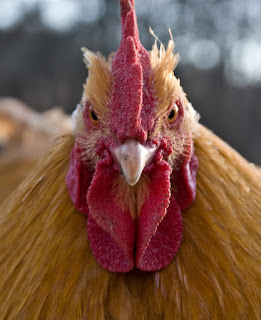 There's a nearby farm that, in the Summer, serves lobster rolls at a counter in a farmhouse. The lobster roll is delicious, plus you get to watch chickens in a coop while you eat. There are about twenty chickens and they're very large. You see them battle for dominance as they strut and peck at each other.

On Tuesday I went there for lunch. Got my sandwich, sat down and... no chickens? The roost is empty. I wonder about their absence and pick up my lobster roll for a first bite. Before I sink my teeth into it, I hear some clucking and, suddenly, there are twenty chickens running around the corner of the barn toward me. They're out of their cage and in the dining area. I wonder why that is.

I'm quickly surrounded by a bevy of angry birds. They look mean. And hungry. I reassure myself that I reside on the top of the food-chain so there's no reason to get scared of a bunch of birds. Before I finish that thought, two of the biggest ones jump up on my table. They walk toward me with menace in their beady little eyes. Up close, they are much larger than you expect. One lunges toward my sandwich and pecks at it. No! I am not surrendering my lunch!

I push him back and despite my shove, he doesn't budge an inch. He's heavy, like those weight-balls at the gym. He feels rock solid, and looks around 50 lbs. I realize I'm not going to be able to fend off the angry birds on my table without someone getting hurt. They again advance toward my sandwich.

I scoop up my lunch, stand up and back away from the birds. Simultaneously I start to laugh. I'm being attacked by chickens! Nobody will believe this happened. Everyone thinks chickens are cute little creatures; few know the menacing evil that lies in the heart of these fowl beasts. I didn't want to hurt them but I also lost the tranquility of my workday lunch.

My second surreal experience has to do with balloons.

Did you ever see the 1970 movie "Airport"? Not the later satire, "Airplane," but "Airport." It was a scary film about an airplane disaster. A fancy new Boeing 707 jet is flying to Rome with Dean Martin as its Captain and beautiful Jacqueline Bisset as Chief Stewardess. Martin and Bisset are having an extra-marital affair and Bisset is secretly pregnant with Martin's child. A suicidal passenger locks himself in the bathroom and blows up a small bomb. The bomb ruptures a small hole in the plane wall through which things get sucked out by the difference in air-pressure. I'll never forget the image of Jacqueline Bisset, hanging sideways in stocking feet, clinging to a seat to avoid being sucked out of the plane. The scene was a terrifying illustration of physics.

Anyway... on Friday of last week, I went to a party store and bought four balloons for Robin to celebrate our upcoming anniversary. I stuffed the balloons in Gina (my Fiat Abarth) for a ride home. 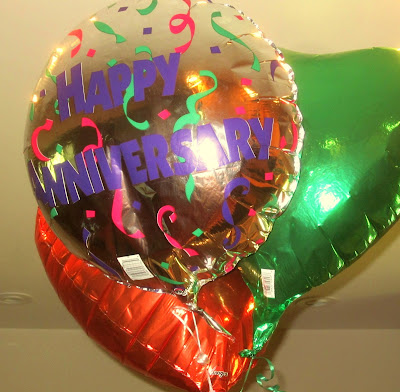 It's hot and the air in my car feels stifling. I ponder whether it is safe to open the passenger-side window. Recalling the horrifying scene in "Airport" gives me pause but I overrule my caution and suspect the cinematic disaster was exaggerated movie-magic. So I push the window-button and hear the window go down a few inches.

WHOOSH!! Instantly, all four balloons are sucked outside the car. I frantically grab at their cords while trying to steer the car. I get the cords but am unable to do anything for several seconds -- I'm in heavy traffic and need to keep my eyes on the road. When traffic slows, I look sideways and see only cords stretching out the window. I gently pull them in and... three balloons. There had been four. I spy out my rear-view mirror and see a red balloon dancing gaily in the wind as it rises and rises. The escaped balloon's movements look joyful and conscious. As if they are deliberate communication. "I'm free!" the red orb exclaims, "I'm flying in the wind, not trapped in some lousy house!"

It really felt like the balloon was talking to me. Realizing the absurdity of that idea, I laughed. Again. For the second time in one week.

Do you ever have surreal experiences? Tell me about yours.
Posted by Shybiker at 12:45 PM