I was born in 1957.  A picture was taken that year of a famous encounter.  You may or may not have seen the photo; it's worth telling you about in case you haven't.  Here's the picture... 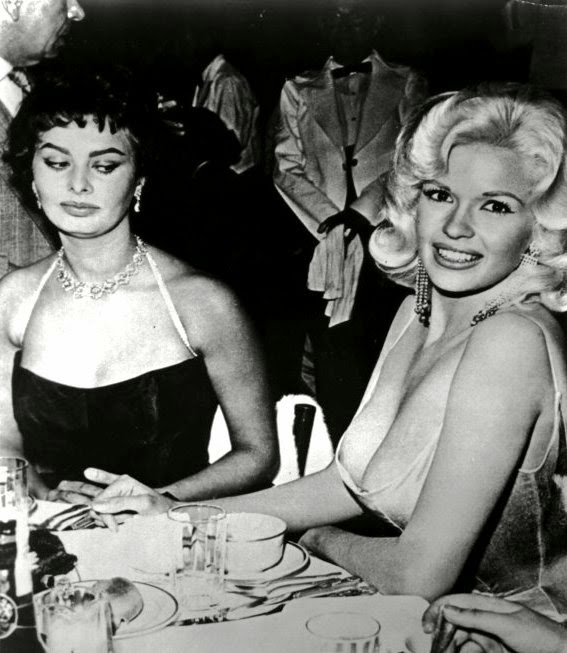 In the photo, Sophia Loren is eyeing Jayne Mansfield.  In case you're too young to know who these women are, Sophia is an internationally-acclaimed actress.  She's still alive at age 80.  Back then, people thought she was gorgeous.  She won an Oscar for one of her roles.

At the time of the picture, Sophia was only 22 years old and had just arrived in the U.S. from Italy.  She was beginning her long career in Hollywood.

Jayne Mansfield was known as a "blonde bombshell" in the 1950's.  After succeeding on Broadway, she made movies in Hollywood.  The media referred to her as the "working man's [Marilyn] Monroe."  Sadly, Jayne died when she was only 34 in a car accident.

If you know actress Mariska Hargitay from "Law & Order: SVU," you might be surprised to learn that Jayne Mansfield was her mother.

Sophia just published a memoir this week in which, for the first time, she talks about the encounter shown in the photo.  Referring to Jayne, Sophia says, "She sat down.  And now, she was barely …  Listen.  Look at the picture.  Where are my eyes?  I’m staring at her nipples because I am afraid they are about to come onto my plate.  I’m so frightened that everything in her dress is going to blow -- BOOM! -- and spill all over the table."

Have you ever seen this picture before?  What do you think of it?
Posted by Shybiker at 1:06 AM