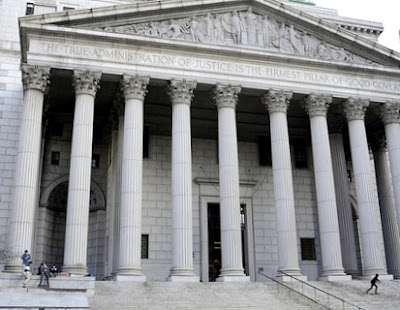 Last week, I conducted a large commercial trial before a jury.  That's not unusual for me, but what was noteworthy was where I did it.  The trial was in a courthouse you've all seen many times in movies and on television.  The Supreme Court building at 60 Centre Street in Manhattan. 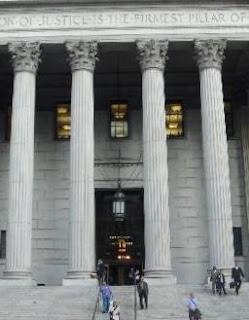 This building looks like a courthouse.  Classic features, including large columns, numerous outdoor steps and judicial ornaments.  It is for that reason that many films and TV shows use exterior shots of the Court.  For example, every episode of "Law and Order" shows scenes of the characters chatting while walking up or down those steps.  That's actually inaccurate because this Court only hears civil cases -- not criminal ones -- and L&O episodes deal with criminal prosecutions.  Criminal cases in NYC are handled in a plain building elsewhere so the producers fudge a bit to give viewers a better impression than exists in reality.

The courthouse was designed in the 1920's by famous architect Guy Lowell and hasn't changed since.  I first remember going there as a new lawyer 30 years ago and being awed by its majesty.  Inside, the courthouse has a large, open rotunda decorated with paintings on the ceiling.  It is designed like a wheel, circular with spokes going out in every direction, at the end of which are courtrooms.

The building is magnificent.  I wish, however, they'd spruce up the interior a little which, by now, is not only aged but poorly maintained.  Water fountains don't work; there's no accommodation for computers or electronic devices.  Newer courthouses are built for contemporary use and most are set up for modern technology.  Then again, those buildings lack the character of 60 Centre Street. 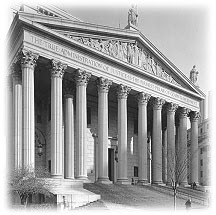