I saw a funny, but true, news story and it reminded me of something I often ponder -- How come you rarely hear of women doing the stupid stuff men do?

To keep you from thinking I'm exaggerating, I'll quote the news article verbatim: 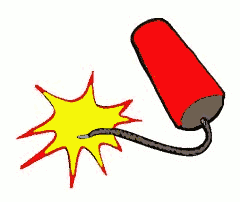 "In what appears to be a party trick gone awry, an Australian man suffered severe burns after he put fireworks between his buttocks and set them off.  The New Zealand Herald reports that paramedics near Darwin, Australia were called to the scene on Saturday night, but the unidentified man had already taken himself to the hospital to be treated for injuries to his posterior and genital area.  'What must of seemed to be a great idea at the time has backfired, resulting in the male receiving quite severe and very painful burns to his cheeks, back and private bits,' Senior Sergeant Garry Smith said. Police believe alcohol could have been a factor in the firecracker-fueled accident."

In case you don't believe me, the story is here and here.

You never hear about a woman doing something like this, do you?  Why do you believe that is?  Are men genetically more prone to stupid behavior?
Posted by Shybiker at 6:59 AM