Your Turn -- The Ladies' Room 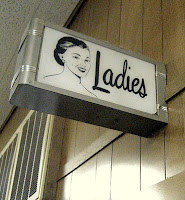 I was pleasantly surprised at the number of comments my last post attracted.  Apparently you like my discussion of bathrooms more than my outfits.  :-)

Bathrooms are an essential part of modern life.  As such, they develop a culture about them.  Many of your comments raised points about women's rooms that were utterly unknown to me.  Like the idea that women might chat with a stranger in a public bathroom.  That's so odd to hear because men, in public bathrooms, never say a word.  Not a word.  They don't even look at each other.  They fear being drawn into a sexual encounter and don't want to give any signal that might be construed as inviting one.

I have a few questions.  First -- and this is something all men wonder about -- why do women go to the bathroom in pairs/groups?  Dining at a restaurant, when one woman rises, the others seem to instinctively need to go at the very same time.  This confuses men because, for us, the only reason you go there is to empty our bodies.

My guess is that women want to talk "backstage" about things they prefer not to discuss in front of the men.  Am I right?  Or do you fear monsters lurking behind the toilet?

Second, isn't it unfair that you have to wait in long lines at the Ladies' Room?  They should build more toilets for women to use so the backup doesn't get so bad.  Whenever I see a line at a theater or concert, it saddens me.

Third, have you ever seen a bold woman enter the Men's Room instead of waiting on that long line?  I have.  Then again, this is New York.  :-)  Do you believe it's okay to do this?

Given the popularity of this subject, maybe I should turn my fashion-blog into a bathroom one...
Posted by Shybiker at 10:38 AM