My town (Huntington) has an art-film house which shows independent movies, foreign films and artistic fare.  The place is a Mecca of culture in the suburban desert. 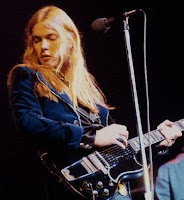 Tonight, I was lucky to see concert footage from the early Seventies of one of the best rock bands of all time, The Allman Brothers Band.  The Allman Brothers were huge in the Seventies, with several big hits like "Ramblin' Man," "Whipping Post" and "Midnight Rider."  They were the King of a genre known as "Southern rock" which ruled among my friends.  (Other Southern rock titans were Lynyrd Skynyrd, The Marshall Tucker Band and The Charlie Daniels Band.)

The Allman Brothers band had two terrific musicians -- founder Duane Allman and guitarist Dickey Betts.  In my opinion, Betts was the greatest guitarist of all time, a view that is shared by many.  His virtuoso playing was magical.

Duane's brother Gregg married Cher before she realized he was a full-time drug-addict.  When she learned this and gave him an ultimatum, he kept drugging and she dumped him.

Allman Brothers songs start out structured but seque into long passages of jazz-like improvisation.  Those passages, with instrumental solos, transport your mind to another reality.  Then, when your floating out in space, the band brings back the structure, with remarkably tight playing.  Listening to their songs is like taking a journey to another galaxy.

Their music still stands up and I listen to it regularly.  Their flights of musical fancy provide therapeutic benefit to me.

Have you heard of this group?
Posted by Shybiker at 12:01 AM