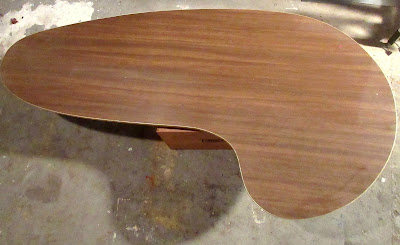 When I was a young child, we lived in a small, modest home. It seemed big to me at the time but I realize now it was the smallest place a family of four could have fit. We spent most of our time in the living room which was also small.

The living room contained a coffee-table of mid-century style. With my family's bourgeois taste it's surprising they had a table of such panache. The table was, however, made of cheap imitation wood and ringed with a band of brass metal.

This table was the centerpiece of my childhood. We lounged on a couch wrapped around the table. Everything of note was put on that table. Everything important in my family's life happened around that table. I remember my brother and I lying on the carpeted floor next to it while our parents watched TV and issued orders. There were no remote channel-changers back then so our job was to get up and turn the TV dial when so commanded.

My parents moved from the house in 1974 and went to a bigger house nearby. Later, in 1985 my parents moved to Florida. During that period they owned a cheap house in the area which they rented to tenants. I eventually moved into the rental house in 1985 and have been living there ever since.

I believed the coffee table of my youth was lost to history. I was in high school when my parents left that house and I never saw the table after that. I was shocked this week to discover the table hidden in the attic of my current home. Apparently, before my parents left for Florida, they disassembled and stored it there. I never knew that. Only because of renovations did I bother to look in the attic. When I crawled into the three-foot high space I instantly recognized the table and its major role in my childhood.

The table's legs are missing but that won't stop me from pulling it out of the dustbin of history. I plan to clean it up and install new legs. I found some online and they are inexpensive ($25). Once I restore the table to its former-glory I'll display it in my future playhouse. (I'm buying a second home soon to use as an office, art studio, party center and all-around playhouse.)

The picture above is what the table looks like now.