This is a fun story about photography, history and art.

I used to assume one needed a fancy new camera to take good pictures. My Holga film camera has taught me otherwise. A cheap, plastic relic from the past offers unimagined artistic possibilities. The pictures it produces aren't shabby even if the camera is utterly basic.

A good deal of credit goes to its use of film. Photographic film was carefully developed over a century to optimize quality. Like vinyl records, film records reality accurately, surpassing digital reproduction. Two decades ago film photography was replaced by digital photography for commercial, not artistic reasons. Cheaper technology always wins the marketplace even when it's not as good because the majority of consumers value cost over quality. 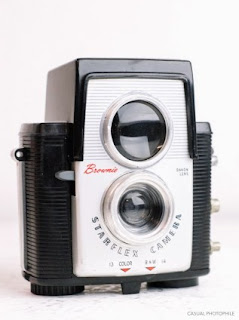 A few years ago I picked up an old Brownie camera in a thrift store. I paid $5 for it. I bought it as a decoration and assumed it won't work because it's old.  Again, an assumption.

After discovering my first assumption wasn't true, I just decided to test this second assumption. Simply because a camera is old doesn't mean it doesn't work. In fact, it can produce attractive images on film when used with a good eye.

The first Brownie was made in 1900. Not only was it one of the first cameras used by ordinary people, it was the most popular. Kodak sold tens of millions of them during the middle of the last century. The original Brownie was simply a square cardboard box and glass lens. Later, the cardboard was replaced by Bakelite, the first synthetic plastic.

The model I found was made between 1952-1964. Back then it was inexpensive ($10) and intended for children and teens. The camera is very small and fits easily inside my hand. It has no battery or electric parts. The design couldn't be simpler: just a chassis for holding film tucked into a plastic box. You lift a metal hood on top of the camera and look down into the viewfinder to see a reflected image coming from the upper of two lenses. (The bottom lens takes the picture.) This kind of camera is called "twin-lens reflex" because of the two lenses; most other cameras (SLR; point-and-shoot) have only one lens. SLR actually stands for "single lens reflex."

The design of the Brownie is surprisingly simple and barely evolved from its 1900 predecessor. There's only one shutter-speed (1/50th second), one aperture (f/14) and one lens-length (51mm). There is no way to focus the lens. There's no hole to attach a tripod, no way to change lenses, and no place to add a filter. The camera was made to take basic "snapshots."

Researching the Brownie, I found its original instruction manual online. The camera uses a type of film I've never tried before -- "127 roll" which is larger than 35mm (SLR) and smaller than 120 roll (Holga). Kodak stopped making 127 roll film in 1996 but there's one company in Japan that still produces it. I just ordered two rolls online. I plan to load the Brownie up with film, shoot these rolls of 127 film and see what happens.

Part of the appeal of a project like this is you don't know how it'll turn out. I might get back a set of blank negatives (which happened to me last month with the Holga). Or a bunch of outstanding photos (another Holga experience). Or something else entirely. Who knows?

I can't wait to find out. I'm playing with history. :) 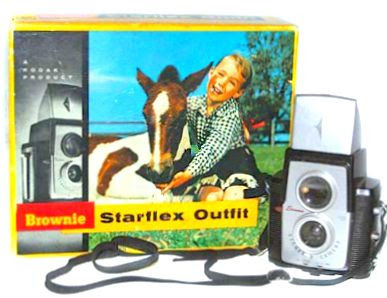