The Lives Of Women

Recently I saw two movies that stunned me. Both are about the lives of women and how they're skewed by society's misogyny. 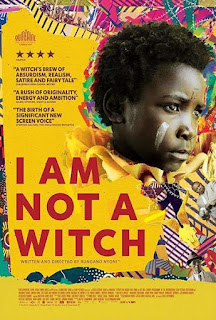 "I Am Not A Witch" (2017) -- Whoa. Unbelievable movie. Made by a Zambian woman who moved to Wales, the film tells a story of a girl in Africa accused of being a witch. The tale is bizarrely funny at times, terribly moving at others. It confuses, entertains and ultimately educates us about cultural views of women. When you research and later learn there are actual, real witch-camps in Africa, your mind explodes.

"Invisible Life" (2019) -- I reviewed this film last week here. The film depicts disparate fates of two sisters who make different choices (one is brash, the other timid). It's impossible not to condemn the society that ruins their lives; the sisters are doomed no matter what choices they make.
Posted by Shybiker at 10:36 AM