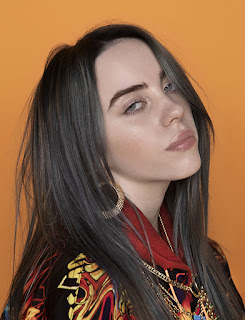 Okay, I decided to check out the fuss about Billie Eilish and bought her debut album (on yellow vinyl). It's very good.

Billie's music is appealing. The lyrics are surprisingly deep. Her soprano voice has been accurately described as ethereal.

Billie is so young (18) -- she was born after September 11th. I like that "Pirate" is one of her middle names (Billie Eilish Pirate Baird O'Connell). She was born in LA and raised by two actors/musicians who encouraged her and her brother Finneas to explore the arts. They've started a musical career that is quickly catapaulting them to superstardom. Billie will sing the title-song in the next James Bond film; she performed at the Grammys; and she will perform again at the Oscars. You'll soon know her as a major celebrity.