Several years ago, I was searching for interesting blogs to read and found one of exceptional merit, The Beheld. The blog examined issues I care about. It focused on women's relation to beauty. The blogger considered the subject with rare intelligence. I learned numerous insights from the blog's scrutiny of the beauty industry, its marketing of beauty products and our society's cultural gender-norms.

The blogger's name is Autumn Whitefield-Madrano. She is, beyond cavil, the smartest woman in New York.

Two years ago, Autumn announced that she was suspending her blog to concentrate on writing a book. As sad as I was to be deprived of her regular writing, I knew it was the right choice for her and for us. If anyone could produce an engaging, educational book on this difficult subject, it would be her. The brief sacrifice, I hoped, would be worth it. And it was. 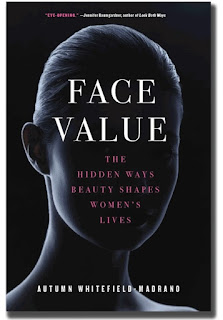 Autumn just released her book, called "Face Value: The Hidden Ways Beauty Shapes Women’s Lives." It is published by a major house (Simon & Schuster) and is available at most bookstores, including Barnes & Noble and Amazon.

Examining complex ways women relate to beauty, the book looks at the marketing, consumption and cultural significance of beauty products. Actually, the book goes further than that. It plumbs the condition of being female in modern Western society. The inquiry extends beyond beauty products and considers other important subjects. For example, Autumn skillfully scrutinizes the linguistics, psychology and sociology of compliments, like "I love your dress!" The role compliments play in woman-to-woman interactions is fascinating and when she contrasts it to the situation of women receiving compliments from men, serious issues emerge about cultural conditioning and social power.

Last night I attended a party in NYC celebrating the launch of Autumn's book. It was held at a place called the "Beauty Bar," a nightclub with a retro-salon ambiance. The party was a blast. Autumn radiated authentic joy as she excitedly addressed an adoring crowd. She spoke about her life and thanked the people who assisted her effort.

At the party, Autumn introduced me to her family who had travelled up from Texas and I had delightful conversations with them. They told me about Autumn's youth in South Dakota and her teen years in Oregon. Autumn's parents and aunt beamed with pride as they witnessed tangible evidence of her literary accomplishment.

Right after finishing college in Oregon, Autumn moved to New York and started her career. Her first job was to intern at Ms. magazine. In the decade-and-a-half since then, Autumn has worked as a writer and copy editor for several magazines and held a variety of other interesting jobs.

At the party, in addition to gift-bags, Autumn's book was available for sale. I'd pre-ordered it from Amazon but my order hadn't arrived yet so I picked up another copy. I inhaled the book like fresh Maine air. The writing is everything I hoped for. Autumn's points are lucid and convincing, her prose is witty and sharp, and her style is inviting. It's a book that everyone will enjoy.

Oh, and did I mention I'm quoted in it? DID I MENTION THAT I'M QUOTED IN THE BOOK?!

I encourage you to check out this terrific examination on beauty and its role in women's lives. You'll learn from and enjoy it.