It appears the holiday season has arrived. We're only a week away from Thanksgiving (and Black Friday) and any visit to a shopping mall will expose you to cynically-early efforts to seduce you into spending money.

My favorite holiday activity is sending out greeting cards. I've started assessing how many I need this year and who'll be lucky enough to receive them. I send out a lot (around 100) and hand-write them so the work takes some time. I'll probably start next week with that. How 'bout you: do you send out cards? 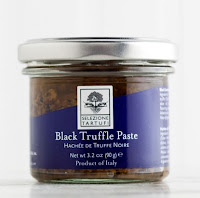 A second-favorite thing is getting presents. Who doesn't like presents? I've learned a trick -- when people ask what I want, I request stuff I crave but never get myself. I'm naturally ascetic and rarely buy myself nice things. It's good to receive those things as gifts because I savor them. A few years back, I asked for and received ridiculously-expensive caviar which was fun to try.

This year, I'm asking for two things I've always wanted to try but have never sprung for due to their high cost -- truffles and Iberian ham. Have you had either?

Truffles are underground fungi prized for the strong flavor and aroma. I've never had one and am dying to see what the fuss is about. Truffles are extremely expensive (thousands of dollars per pound) so they're usually shaved to spread flavor as efficiently as possible. They're available in paste and sauce from Dean & Deluca, a famous gourmet-shop in NYC. (Be warned that most "truffle oil" does not contain actual truffles but, instead, uses synthetic flavoring to mimic the taste.) 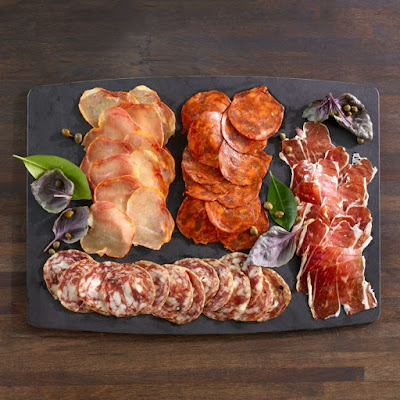 Another food I want to try before I die is Iberian ham (Jamon iberico). It is the best ham in the world, made from pigs raised in Spain on acorns and olives. The pigs are coddled and pampered which produces fine-quality meat. There is only one company legally allowed to sell this ham in the U.S. and the ham's price is high (around $96/lb.). You can get it in a sampler, again from D&D.

What do you want Santa to bring you this year?
Posted by Shybiker at 2:27 PM